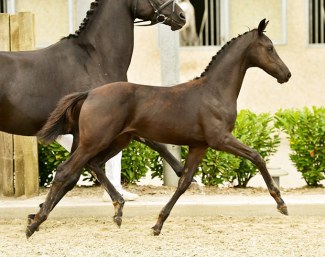 The black filly Nina Reina became the top selling foal at the 2018 Dronten KWPN Foal auction, which achieved mediocre prices with just three foals selling for over 10,000 euro in a collection of 63.

The Dronten Foal Auction was held in Ermelo, The Netherlands, on 8 September 2018 and it was the 28th edition.

The second most expensive foal was filly Nohla Turfhorst (by Franklin x Jazz) which was purchased by Anita Janssens of FIRA Horses for 11,000 euro.

The average price for a foal at this auction was 5,600 euro.