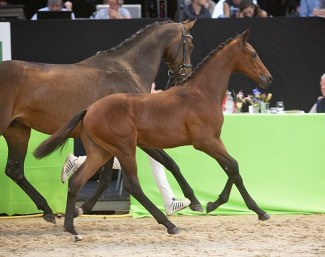 The bay colt by Valverde x Vivaldi sold for 81,000 euro to Austrian dressage sponsor Marianne Jerich. Adelinde Cornelissen made the final bid for Mrs Jerich. For Vesuvius' breeder Elbert Pater the sale was a shocking event as this was the first time ever he offered a foal for sale via an auction.

“Marianne was very keen on this particular foal. It was so exciting! I’ve bought foals before over the telephone, but never for this sort of amount. The foal will now be going to Austria. And who knows, he might end up in my stables one day. I certainly wouldn’t mind,” said Cornelissen.

The most expensive filly was Nina Felur van de Paulinehoeve (by For Romance x Jazz). She sold for 36,000 euro to the Dutchman Jan Kooi. He purchased seven foals in total at Borculo.

Filly Nalucienne STMT (by Quantensprung) sold for 19,000 euro to Dubai.