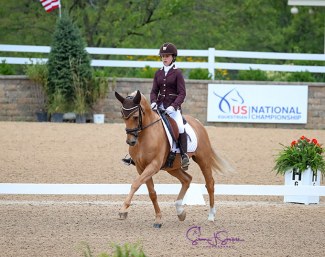 The Grand Prix division continued their quest for top honors, while the junior riders performed their first tests of the competition.

Ellanor Boehning and Kabam firmly held on to their lead from Thursday to claim top honors in the USEF Pony Rider Dressage National Championship. Twelve-year-old Boehning (San Diego, Calif.) and the 15 year-old German Riding Pony gelding she owns with Ann Boehning showed off their four-year partnership with a solid test, winning the FEI Pony Rider Individual Test with a score of 68.468%.

“Well I didn’t really expect to come here and do as well as I just did," said a shocked Boehning. "Honestly, it feels kind of like, ‘What just happened!?!’"

Boehning: “When we first went in, Kabam was super throughout the entire test, but then when we got to the centerline eight-meter circle, he hit his leg on the arena fence and did a flying change, so then we stopped and had to redo it. We also picked up the wrong canter lead when we went to do the second eight-meter circle, but I realized it. Other than that, he was amazing.”

Fodor: “‘Slide’ was very good. He was less chatty today; he was more focused. We got our [trot] lengthenings better today. He was really listening.”

Osborne: “‘Ella’ was really good. She tried her little heart out for me, but she was tired, so basically the whole test I had to keep telling her, ‘Go, you have to move.’ But she really tried and she was in a much better frame today, and we didn’t break in any of our trot lengthenings, so that was really good.”

Asher Off to a Good Start in Junior Division

Emma Asher dominated the Junior Team Test by clinching the top two places in the class with Traneenggaards Akondo and Don Fredo HD, respectively. Asher (Greenwood Village, Colo.) and Traneenggaards Akondo, Seeley Equestrian Ventures’ 16-year-old Danish Warmblood gelding, were the first pair to go in the class and captured the lead from the start, winning with a score of 70.859%. Behind Asher and her mounts were Melanie Doughty (Cocoa Beach, Fla.) and Fascinata, a 10-year-old Rheinlander mare, in third place.

Asher: “On Traneenggaards Akondo, there were a lot of highlights in my test, the stuff I have really been working on, that were better. We did have a couple bobbles in our canter tour and our first halt, but he was really fantastic. He is a really good boy. With Don Fredo HD, he was on fire today. In the warm-up he was really tense, and around the outside [of the arena] he was pretty spicy, but he was really good in the test until the last extension when he had to add some pizazz. But he was really good today; I am really happy with both of them.”

On the things they can approve upon:

Asher: “With ‘Akondo,’ I want to get him more relaxed and supple for the [FEI Junior] Individual [Test]. With ‘Fredo,’ it’s the same thing – relaxation and less tightness and anticipation.”

Doughty: “With Fascinata, I think we can get more expression and her walk pirouettes can be more flowing, so I would like to work on that.”

Lexy Donaldson was the recipient of the The Anita Owen Perpetual Silver Stirrup Trophy. This trophy is presented to the Junior or Young Rider competitor who best displayed sportsmanship throughout the event.

Jones: “I was super happy with today’s ride. Like Wednesday, he was really fired up; he was probably more fired up than he as on Wednesday, so I did get a little nervous. I had to remind myself to stay calm and relax to give him the confidence. Our trot work was super, and we did have one mistake in the canter transition, but, again, I had to remind myself it was okay. After that, we kept it together and it was really nice ride, so I couldn’t be more proud.”

Charlotte Jorst and Kastel’s Nintendo had a respectable test to win the Grand Prix Special with a score of 68.809%. While there were a few bobbles in the test, Jorst (Reno, Nev.) was happy with Kastel Denmark’s 15-year-old Dutch Warmblood stallion. The pair leads the USEF Grand Prix Dressage National Championship heading into Sunday’s FEI Grand Prix Freestyle.

Jorst: “My test was really great. I still didn’t achieve my goal of no mistakes, so I am still working on that. I am very angry with myself for that, but, as usual, Nintendo was doing his very best and being out ther for me. It is going on five years now, I can’t believe it, what a great horse he has been to me. I am just so incredibly grateful to own him.”

Schrader-Williams: “Today I was really hoping to keep the same consistency from the Grand Prix yesterday. We wanted to put a little more power in the piaffe and passage, but ‘Mickey’ tries so hard that you have to keep everything pretty quiet and calm, so he had a couple little bobbles in the half-passes and the twos [tempi changes], but then, he started to really settle. You have to be careful with him just to keep him confident.”

Wagman: “I thought my test started great; I was actually thrilled with the beginning part of it. Unfortunately, he started to anticipate the piaffe in the walk and that threw us off a little bit. And then, we had one other mistake in the half-passes where I missed the flying change, so those two mistakes cost us some points but there were so many highlights I can’t be unhappy with it. It is only our second time doing the Special; we are still really new at this, so I’m thrilled.”

Looking ahead to their freestyles:

Jorst: “I have new music that I have never ridden to … and new choreography that I also need to learn, so it will be really fun for me to get out there. I love things like that where it is all new and fresh. I am really excited about the music and seeing how it all pans out on Sunday.”

Schrader-Williams: “I love my freestyle; I love the music. It is just a lot of fun. He is a horse that can get internally hot, but, in general, he is not a horse that is spooky. He loves the music; it is a lot of fun. I just try and go in there and have a great time, make him feel proud of himself, and let him show off.”

Wagman: “My freestyle I will be riding for the second time as well, so this is also kind of new for us. It is to new music that my husband’s nephew composed, so it is an original piece of music with some samples of Depeche Mode in there. It is really fun music and it is a fun freestyle, so I am just excited to go out there one more time and get more experience at this.”