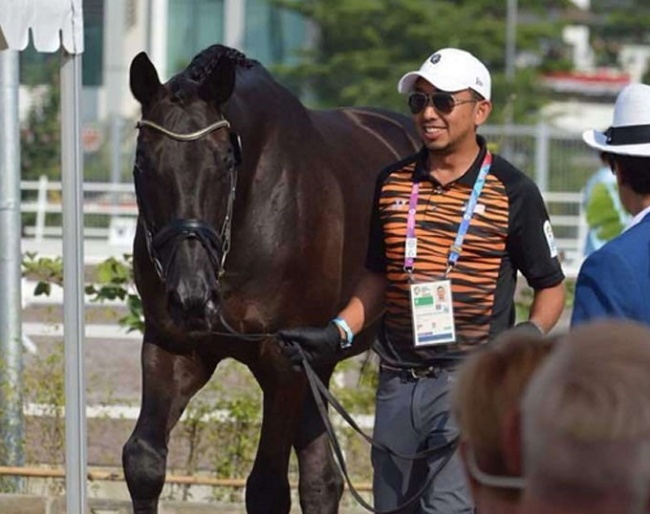 Malaysian individual rider Qabil Ambak won the Intermediaire I with 73.499% at the 2018 Asian Games in Jakarta, Indonesia, on Tuesday 21 August 2018. The Intermediaire I did not count for any medals this year and was just used as a qualifier for the freestyle, in which the individual medals are decided. The Kur to Music is on Thursday 23 August.

The 2018 Asian Games in Palembang near Indonesia's capital Jakarta kicked off on Monday 20 August 2018 with the team competition based on the Prix St Georges. Malaysia's sole individual representative Qabil Ambak won the Prix St Georges but was not in the running for a team medal.

The 38-year old Ambak and his 12-year old Hanoverian bred Rosenstolz (by Rotspon x De Niro) were a league of their own in the Intermediaire I and scored a winning 73.499%, leaving the competition behind them.

Ambak took to Facebook after the Inter I and wrote, "finish on top today to qualify for the freestyle final. Thank you for all the wishes and prayers. Hopefully will be able to create history for equestrian sport in Malaysia after 20 over years in this sport."

Ambak's main passion lies in show jumping, but in 2017 he switched back to dressage as the 2017 South East Asian Games were hosted in Malaysia. He had then last competed in international dressage at the 2010 Asian Games in Guangzhou, China. Since then he has been focusing solely on show jumping. For his dressage training, Ambak relies on Dennis youth team trainer Dennis Fisker. Last year Ambak competed Equestricons Walkure, but for the 2018 Asian Games he took over the ride on his sister Quzandria Nur's Rosenstolz, who was previously shown in Europe by Norwegian Siril Helljesen.  Malaysia did not send a team to Jakarta because Quzandria is currently dedicating her time to being a first-time mom, while another team horse got injured.

Siu has only been riding Furst on Tour for one year. The Hong Kong Jockey Club acquired the gelding specifically for Siu for the 2018 Asian Games. Furst on Tour is a well known face in Europe as he won triple gold at the 2014 European Junior Riders Championships in Arezzo, Italy, with German Anna Abbelen. He also won team gold at the 2016 European Young Riders Championshops in Oliva Nova after which he was sold to Hong Kong.

Korean Hyeok Kim and the 11-year old Hanoverian Degas K (by De Niro x Walt Disney) moves into third place with 71.558%. The 23-year old Kim has been training in Germany since 2017.

Kim seems to be saving the biscuit for Korea by potentially providing his country individual glory after winning team silver on Monday. Korea has won team gold at the Asian Games non stop since the 1998 Games in Bangkok, but in Jakarta they dropped to silver.

The Korea Equestrian Federation (KEF) has lost direction since 2016, as it was intertwined in a scandal involving Soon Sil Choi, whose influence-peddling ways led to the impeachment of former President Geun Hye Park. The sports ministry concluded that the KEF had fabricated key documents and violated its own rules to cater to Choi's daughter, the Danish based Yoora Chung, who made the national team in 2014 and won team gold. In light of the scandal, the KEF fell into a leadership vacuum and lost major corporate sponsorships.

After winning team gold on Monday, the Japanese dressage riders could still be in the running for an individual medal as well. Olympian Masanao Takahashi and his 19-year old Hanoverian stallion Fabriano were fourth with 70.558%, while team mate Shunsuke Terui and the Holsteiner bred Alias Max (by Aljano) was fifth on 69.411%.