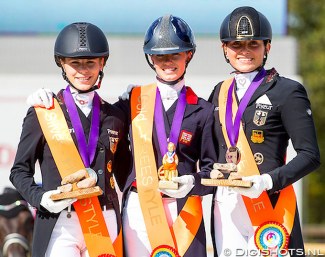 For young British Grand Prix rider Charlotte Fry the 2018 show season is one for the history books. Two weeks after winning the gold medal on Glamourdale at the 2018 World Young Horse Championships in Ermelo, she added another individual gold medal to her record at the 2018 European Under 25 Championships in Exloo, The Netherlands, on Friday 17 August 2018.

"I’m in shock. This is all really unexpected," said Fry. "I trained with Carl when I was 14 to 17 years old, and then moved to Holland when I just turned 18. Carl actually suggested I should come over to work with Anne Van Olst who is my trainer now, so he put this opportunity my way and I’m very grateful for that!"

Fry added that Dark Legend is a very nervous horse. “This is the first show he felt confident in the ring, so he peaked at a good time!. Today was a really good test, he couldn’t have been better, he really rose to the music and danced to it." When asked about her plans for the future, she replied "to compete at the Olympic Games some day, but for now I just want to get my feet back on the ground and start training again."

German Jil-Marielle Becks and her parents' 10-year old home bred Westfalian gelding Damon's Satelite (by Damon Hill x Rubin Royal) came close to scoring a golden hattrick, but had to settle for kur silver. After team and individual test gold, Becks landed the second step on the podium with a 79.265% earning freestyle ride to the music that was originally composed for Helen Langehanenberg and sire Damon Hill.

"This year we started late in the season and in spring we couldn't really put more technical difficulty into the new freestyle for Satelite or focus it on the straights and adapt to his tempo," said the 20-year old Becks. "We wanted to do that in the autumn or winter, so we started with a freestyle that is not really optimal for him. Furthermore I didn't really expect to win silver anyway with this tough competition."

Becks was thrilled with how her horse coped at the Championships. "I'm super happy that it worked. Satelite was in top shape and also today he really worked with me and let me ride him, even though I noticed that his energy level the third way was a bit less. Still for the first time we had no mistakes in the Kur and got good marks for it. I'm totally happy."

The 2017 European Under 25 Champion Lisa-Marie Klössinger and her 13-year old Baden Wurttemberger bred FBW Daktari (by Donautanz x Carpaccio) secured team gold on Wednesday but landed off the podium in fourth place in the Short Grand Prix. Fortunately the duo found a medal scoring form in the freestyle and with 78.010% they secured the bronze.

"Now I finally also have my kur medal. That was my goal for this European Championship and I did it," said Klössinger, who could not compete for a Kur medal at the 2017 European Under 25 Championships. Rain had damaged the sound system at the Lamprechtshausen venue and in a very surprising move the whole kur leg of the Championships was cancelled.

"This was a nice finish for me," said the 25-year old Lisa-Maria who is in her last year as an Under 25 rider. "Yesterday I couldn't give my horse the trust he needed, so we stayed a bit below our potential. Still I am very happt. Today we had a fault-free round, it was fun and then I even got a medal out of it. Our first piaffe was still a bit insecure, the second was better. At the end it was still nerve wracking because I expected the Danish rider to kick me off the podium. But I was lucky."

The Rest of the Best

Dutch Denise Nekeman and her 12-year old KWPN stallion Boston STH (by Johnson x Quattro B) improved every day at the Championships, going from a sixth place in the Intermediaire II and team silver, to a fifth place in the Short Grand Prix. In the Kur to Music they climbed one place and finished fourth with 77.200%.

"I rode well all days, but the rest is also riding super and all were very close together. You either get it or you don't and I seemed to be stuck on fourth place," said Denise Nekeman, who is a student in Commercial Economy at the Johan Cruijff Academy. "I knew it was going to be tough in the Kur to Music. I had seen the others ride and I rode my Grand Prix freestyle which I had only ridden a few times. I wanted to really go for it and see where we would end. At the end of the test I wasn't really sure, but we got nice points nonetheless."

Denmark's Victoria Vallentin and Sam Duckworth's 12-year old Oldenburg stallion Ludwig der Sonnenkonig (by London Swing x Liberator) could not maintain their medal winning form in the freestyle. On Thursday in the Short Grand Prix they earned individual bronze, but there were a few challenges in the Kur and they ended sixth with 75.645%

Everyone was singing the praises of the venue at Hippisch Centrum Exloo where the Organising Committee stepped up to the plate at very short notice following the withdrawal of Roosendaal. And the quality of the performances from the Dressage world’s rising stars left even the judges in awe. “What we saw here this week was almost at the same level as senior riders, and it’s really very exciting!” said Ground Jury President, Francis Verbeek-van Rooy.