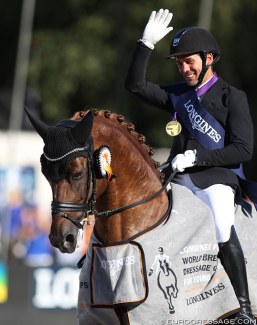 Severo Jurado Lopez and his poster boy handsome D'Avie enthused the judges and crowds in the finals test for 6-year olds and won gold at the 2018 World Championships for Young Dressage Horses in Ermelo, The Netherlands, on Sunday afternoon 5 August 2018.

The 6-year old finals were judged by Kurt Christensen (DEN), Adriaan Hamoen (NED), Dietrich Plewa (GER) and Isobel Wessels (GBR) and they had quite clear mission statement with the way they assessed the horses. Aside from one horse clearly benefitted from 'beginner's luck', the judging was very strict yet fair. The panel was not afraid to use a wide spectrum of scores. When it was good, they were (over)enthusiastic with their marks - a noticeable trend in the international dressage sport nowadays. However when it was bad they were not afraid to immediately drop into the 6-range. They rightfully did not accept tension and mechanically moving horses and while they did note mediocre bridle contact and tilting in their public commentary, they were still fairly generous in their submission scores once in a while.

The 6-year old finals were a bit lacklustre compared to the stellar quality seen in the 5-year old division this year. This is no surprise though as the 6-year olds have to execute a test with a far higher degree of technical difficulty. Training and rideability have to be on point and those aspects of the dressage sport can no longer be masked, hidden or clouded by simply flashy gaits. While the 5-year olds steam through a test in medium or extended trot and canter and make people's jaws drop with their splendour, the 6-year olds have to show collection and real elasticity in more difficult movements such as the turn on the haunches, half passes and flying changes.

Spanish Severo Jurado Lopez competed Andreas Helgstrand's Hanoverian stallion D'Avie (by Don Juan de Hus x Londonderry) for the first time at last year's World Championships, but the partnership was brand new. With one year of training and development, the combination was much more in tune with each other and earned gold despite not being fault-free. They won the class with 9.26 points

D'Avie's looks are to die for. He has such a pretty face, is beautifully marked and has a lovely silhouette. However, in trot he did become snatchy in the rhythm at times (especially in the shoulder-in left), but the balance was better in the left half pass. The shoulder in right had a better rhythm and the half pass right was ground covering, but the self carriage was not on point. The horse still relied heavily on the direction of his rider. The extended walk was big, and the collected very well regulated. Jurado Lopez rode the turns on the haunches well. D'Avie has a lovely canter and the left extension was powerful and uphill, but the young stallion still struggled with the changes. The first one was short behind and there was a mistake in the third one, which was in two phases. The final trot extension was ground covering, but slightly crooked to the left and hurried.

The judges rewarded the horse 9.8 for trot, 8.0 for walk, 10 for canter, 9 for submission (despite the mistake in the changes!) and 9.5 for general impression. Judge Isobel Wessels began the panel's live commentary with "what an exciting horse to judge. The trot has a huge amount of energy and expression, the walk is relaxed and always correct and the canter is dynamic, uphill, jumping and with lots of expression." They praised D'Avie's willingness to collect but remarked that "there were a couple of little moments where he lost balance."

For the Danish based Spaniard his gold medal with D'Avie is the fifth in his career and the fourth, consecutive golden one (three gold with Fiontini, bronze with Quel Filou). "D'Avie feels so good, now that I have had him one more year," he said about his mount. "With more days passing, he took the atmosphere better. After the test it was good enough for me, but I didn't know if it was for gold. I had to wait."

D'Avie is owned by horse dealer Andreas Helgstrand and it is unsure whether the licensed stallion will stay in Denmark or be sold. "I would keep him for my future, but he's not my horse," he joked. "I'm crossing my fingers to be back in Ermelo next year."

Rookie Strobel and Villeneuve Get Silver

World Young Horse Championship new comer Laura Strobel earned silver aboard Sissy Max-Theurer's Rhinelander licensed stallion Villeneuve (by Vitalis x Dancier). The pair were the winners of the preliminary round but a somewhat tired Villeneuve could not shine as much in the Finals round in 30 ° C heat, even though he was breathing down D'Avie's neck with a minimal point difference. Strobel and Villeneuve were second with 9.24 points.

The pair began with a crooked and unbalanced halt and also finished with a halt that wasn't square. The trot was flowing but the hindleg moved more out from the body than under. In the second trot lengthening he got wide behind, but the third and final one at the end of the test was energetic and really ground covering. Villeneuve was fluent in the lateral movements, although the right half pass lacked some suspension. In the extended walk, the horse achieved no less than three hooves overstep with a good rhythm even though the freedom in the shoulder is limited. The collected walk needed to be more electric. Especially in the walk part it was audible that Villeneuve was not entirely accepting of the bit. He loudly ground his teeth. The canter is the chestnut's best gait. He showed nice uphill strides and especially the flying changes to the left were jumped well through the back. Also the left canter extension was lovely.

The judges rewarded the sympathetic stallion 9.4 for trot, 8.8 for walk, 9.8 for canter, 8.7 for submission and 9.5 for general impression. Villeneuve was praised as a "beautiful horse that is well ridden and easy going." The trot was "secure in rhythm and each medium trot became better. Occasionally there needed to be more push from the hindleg." In the walk the horse needed to "fill the rein and follow the hand more clearly, but the steps were fine." The canter was "expressive, uphill." The judges noted the poor halt, the dropping behind the vertical in walk and the lack of crossing behind in the first half passes as their major submission issues.

Strobel,  who is a student of Dorothee Schneider, beamed with excitement at the press conference. "It's incredible. It's my first time at a World Championships. Last year my horse was reserve. I can't believe that it worked," she gushed. "I'm very happy with the horse. He was a bit tired because it was so warm. I just hoped the judges saw it the way I felt. Most important is that I was happy with my riding and my horse." Villeneuve is owned by Austrian Sissy Max-Theurer and Strobel does not yet know if she will keep the ride in the future. "Hopefully I can," she added.

As the first starter to go in the Finals test, Dutch Dinja van Liere and Hermes, clearly enjoyed some beginner's luck. It seemed as if the judges had not yet put themselves on the edge of their seat when they distributed generous scores for the half Trakehner's performance without having the rest of the pack to compare.

Van Liere's KWPN licensed stallion Hermes is by Trakehner Easy Game out of a Flemmingh dam. He is owned by Joop van Uytert. The dark bay stallion has a gorgeous face, neck and front and tremendous shoulder freedom. His elegant trot stood out with his flashy front leg and decently working hind legs, but the rider kept the horse in a very compressed frame and lifted him with her hands uphill. The trot extensions were ground covering but rushed. The walk was functional but the left turn on the haunches hesitant. In canter the horse regularly lost the clear 3-beat rhythm and came downhill, but the flying changes were very well ridden.

The judges loved it all and rewarded the horse with a 9.0 for trot, 8.6 for walk, 8.5 for canter, 8.8 for submission and 9.0 for general impression. With an 8.78 score they were third and to the rider's own surprise got the bronze.

"I was very happy with my horse. He did a great job," beamed van Liere. "He was ten times better than in the qualification test, so I didn't care what they all thought of my ride. But it was nerve wracking to watch the other ones and wait." Van Liere had nothing to lose going into the Finals test. "On Friday I was too safe, I rode too nicely. In the final I went for it and showed everything he got."

For Van Liere this was her second bronze medal at the World Young Horse Championships; the first time on Capri Sonne Jr, who is now Laura Tomlinson-Bechtolsheimer's Grand Prix horse. "Again this was very unexpected," she said about her bronze medal. "It's extra cool to win a medal. The colour doesn't matter."

German Stefanie Wolf and the Oldenburg gelding Matchball (by Millennium x De Niro) probably presented one of the most beautifully ridden tests in the 6-year old finals and could easily have earned a medal bar higher points. Owned by Johann Hinnemann and Thomas Voss, Matchball is not the most modern looking horse, despite his long legs, but he makes himself incredibly pretty with his lightfooted way of moving and correct training.

The gelding has a very expressive, lightfooted trot and he was totally balanced in the lateral movements. He never lost the rhythm once, yet there could have been a bit more bending in the ribcage on the left lead. In the extended walk he achieved two hooves overstep but the clarity of rhythm was not the best. He did one backstep in the left turn on the haunches. The collected walk was very well regulated by Wolf. The canter had much balance with an active hindleg that was always jumping under. The second flying change was crooked though and especially the left flying changes could have been more uphill.

The judges scored Matchball 8.8 for trot, 7.7 for walk, 8.8 for canter, and 8.9 for submission and general impression. He totaled 8.62 points. They praised the black for being a "really active, engaged horse in tune with his rider. The highlights were the beautiful flying changes."

The sporty, compact yet long legged stallion is quick in trot with an elegant, lightfooted way of going, but he still lacks balance in the lateral movements and especially the shoulders-in. Overall he needed to be collected a bit more so the self carriage improves. In the trot lengthenings the left hind leg clearly side-steps. The extended walk was gigantic in ground cover and clear in rhythm, but in the left walk pirouette Donkey Boy lost some impulsion. The collected walk needed to be more closed in the frame. The canter strike off was difficult. In canter the bright bay is expressive and ground covering but he was ridden too up tempo without proper collection, which led to the horse not always being elastic in the contact. The flying changes were big.

The judges scored  the horse 8.8 for trot, 8.6 for walk, 8.8 for canter, 7.9 for submission and 8.7 for general impression. The judges praised Donkey Boy for being a "wonderful, swinging horse with much quality" and which is "very supple," but they recognized that the rider "slightly overpushed him and he went too fast."