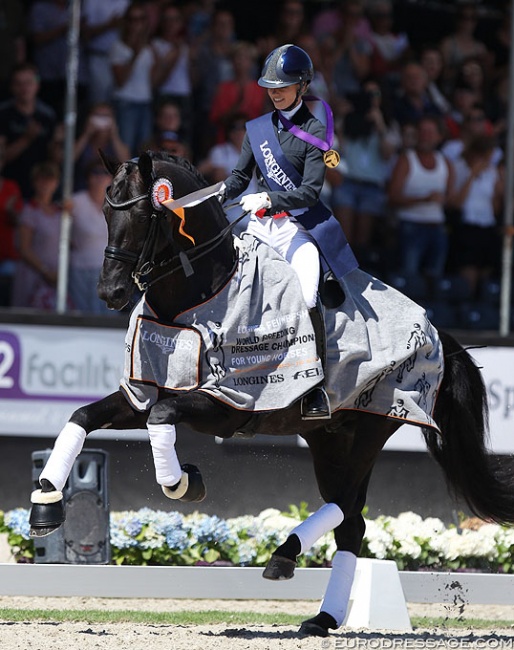 Fifteen combinations qualified for the Sunday morning finals, which was judged by Maria Schwennesen (AUS), Jean-Michel Roudier (FRA), Susanne Baarup (DEN), Christoph Hess (GBR) and Eddy de Wolf van Westerrode (NED). The 7-year old division has only been in existence for three years and the rising Prix St Georges horses get assessed on the quality of their basic gaits, submission, as well as the technical execution of the FEI level movements which includes tempi changes every four and three strides, half pirouettes, walk turns on the haunches and counter canter.

The preliminary round was held on Friday morning and the class was won by Norwegian Isabel Freese-Bache on the Hanoverian licensed stallion Fursten-Look, ahead of Danish duo Carina Cassoe Kruth on Heiline's Danciera and British-Dutch pair Charlotte Fry on Glamourdale. Already then it was obvious that Fry and Glamourdale would be the ones to beat despite their third place and in the Finals the young combination lived up to the expectations.

Glamourdale (by Lord Leatherdale x Negro) is not a newcomer to the World Young Horse Championships. In 2016 he competed in the 5-year old division under Benjamin Maljaars and finished 10th in the Finals.  Bred by J.W. Rodenburg, the powerful black stallion has made an incredible bodily development in two years. He is muscled and powerful and looks well advanced in his training for a young 7-year olds.

Fry and Glamourdale showed off a powerful, and engaged trot with much freedom on the shoulder. Especially the extended trot was more flash in front than behind, and the horse needed to cover much more ground. Still, Glamourdale was very expressive and stayed well balanced in the half passes. Also the extended walk could have had more reach and overstep, but it was relaxed. In the left turn on the haunches the horse lost some impulsion, but the walk part was well ridden. In canter Glamourdale achieves amazing airtime and the extensions were big and very uphill. However, one wishes to see even more stretch in the ribcage and topline in the lengthenings. The horse has a wonderful ability to collect and sit and the pirouettes were lovely, even though the onset of the first one was crooked and the second one slightly big. Glamourdale showed big flying changes but swung to the right in the fours. The threes were better.

The judges' panel rewarded the horse 87.050% and praised the trot for being "very powerful, off the ground and keeping the same rhythm in the lateral movements." They liked to have seen more "difference between the medium and extended trot. The trot got a 9.8 mark. In walk the horse needed to achieve "more overtrack" (7.8) but the canter was perfection to them: "ground covering and with the ability to collect, a 10."

At the press conference an ecstatic Fry was beaming with pride. "It is always good to ride a horse like Glamourdale," she gushed. "He knows when it is a special occasion. He knows his job and loves to compete in an arena like this and at the World Championships." When asked how it feels to sit on such a powerful horse, Fry replied that "it is like flying. You don't touch the floor, even if you do collected or extended canter. He loves to rise to the occasion. He came in, looked and knew: 'now it's my time'."

As a long-time assistant trainer at Gert-Jan and Anne van Olst's stallion station in The Netherlands, Fry is pretty secure of her ride on this top horse. "The future for Glamourdale is very bright," she said. "We are already training the Grand Prix movements and he's very talented." There are no concrete plans for the future though. "I didn't expect to win a medal. First I need to get my feet back on the floor and then we'll make a plan."

Cornelissen and Governor on Silver Repeat

Adelinde Cornelissen and Mr Korbeld's KWPN licensed stallion Governor STR (by Totilas x Jazz) scored their second silver medal at the World Young Horse Championships. Just like in 2017 Cornelissen surprised by really having found her groove on the black stallion, who is bred by J. Streppel, and presenting him in better contact than with her other horses.

The halt at entry was stretched but the trot work was smooth and cadenced without losing rhythm in the lateral movements. There could have been more bending in the right half pass and Governor dropped behind the vertical in the shoulder in. Also in the given rein in trot the nose could have been more out, but the stallion did not loose the suspension. The walk was well ridden, also the collected, even though the right turn on the haunches was a bit big. The canter work was balanced and energetic. Governor showed four lovely flying changes. All in all it was a neat test in which only the nose should have been a bit more out.

The judges rewarded the test with an 84.143% which placed them second. They praised the horse for the "fluent lateral trot work" and the canter which was "so obedient. He didn't take a step wrong." The canter earned the horse 9.5 and the compliments that he is "very willing, very well educated for this level."

Adelinde beamed to be back on the podium. "It felt like I could talk to him. There were no big mistakes, but there is always something you wish you could have done better," she explained. When asked what the secret to her success is, she replied, "it's not me that is just riding him. You need an exceptional horse and a great team to get to Grand Prix."

Freese and Fursten-Look Skip to Bronze

German based Norwegian Grand Prix rider Isabel Freese (née Bache) and the Hanoverian licensed stallion Fursten-Look (by Furstenball x Londonderry) were the surprise winners of the preliminary test receiving the judges' preference over Glamourdale's powerhouse performance. In the Finals' test Fursten-Look was last to go and all the odds were in his favour if he would stay fault-free.

Bred by Johannes Sabel and owned by Lone Boegh Henriksen in partnership with Paul Schockemöhle, Fursten-Look has made his international show debut in Ermelo after an illustrious career in Germany. The drop dead gorgeous black stallion was the 2015 Bundeschampion but he had not yet matched himself against any rivals on the international scene. The stallion is quite slow behind, but Freese impressed with her efficient riding to get the stallion to collect and sit as best as possible for his young age.

In the Finals' test Fursten-Look showed ground covering trot extensions, but he swung in the hindquarters and had to be more electric behind. Freese was cunning enough to ride the stallion in an up tempo and not collect him too much to make him slow. The lateral movements, therefore, were expressive and ground covering but hurried, which led to a very disturbed rhythm in the right half pass. Throughout the test the contact with the bit was soft, but Fursten-Look was not always up in the poll. The extended walk was huge, but the collected walk was not really collected, just slower. The left turn on the haunches needed more impulsion. Fursten-look's strongest pace is the canter, without a doubt. He makes beautiful, uphill strides and had very good sit in the left pirouette. The right one was a bit big, but very expressive. In the tempi changes every four strides the hindquarters swung to the right, and a big mistake crept into the threes. That was the moment the gold was lost.

The judges scored the ride an 84.036% but they made a remarkable public statement in their live commentary. They praised the "really nice performance" and said that the trot was "elastic, powerful and fluent in the lateral work." The walk was "huge, relaxed and the extended walk had fantastic overtrack" but the collected "needed to be more collected." The canter was "huge but needs a more quick hindleg". The judges scored Fursten-look's stunning canter only 8.7 and surprisingly said "the big mistake in the last line of changes also influences the mark in canter." Technical errors in a ride should be penalized in the "submission" part of the score and never in the gaits' part, where the quality of the basic gait is assessed and not failures in the execution of movements!

Danciera and Giovanni Are Fourth and Fifth

Denmark's Carina Cassoe Kruth and Poul Thogersen's Danish warmblood mare Heiline's Danciera (by Furstenball x De Niro) were second in the preliminary test and dropped to a fourth place in the Finals. The lovely, feminine looking elegant mare has a very lightfooted trot and stretched into the contact when given the rein. The trot extensions had two hooves overtrack, but could have been with more uphill tendency, more climbing. The extended walk had sufficient overstep but the mare could march even more through the body. The collected walk was pure in rhythm, despite the mare being a bit fidgety in the contact. In canter, Danciera showed wonderful pirouettes and a great ability to collect. The flying changes were very secure. They scored 82.614%.

Franka Loos and Equilence's KWPN stallion Giovanni (by Chippendale x Scandic) completed the top five with a 78.521% score. The powerful and chunky liver chestnut is a powerhouse mover, just like his stable mate Glamourdale and there are many similarities between the two horses. The stallion showed a good collected walk.  The trot had much power and spring, but Giovanni tilted the head in the half voltes and there was no stretch out when given the rein in trot. Also the right half pass required more bending. Giovanni's lack of stretch forward also showed in extensions, both in trot and canter. In canter the stallion makes massive, uphill strides but they need to be more forward oriented instead of climbing up in the air. There was a mistake in the threes.