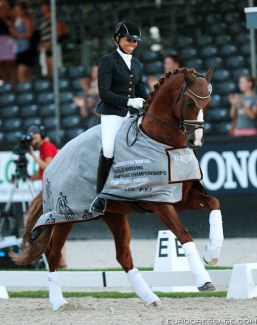 Laura Strobel and Sissy Max-Theurer's Rhinelander stallion Villeneuve captured the pole position going into Sunday's 6-year old Finals after winning the preliminary round at the 2018 World Championships for Young Dressage Horses in Ermelo, The Netherlands, on Friday evening 3 August 2018.

The 6-year old preliminary round was judged by Lars Andersson, Adriaan Hamoen, Dietrich Plewa and Maria Colliander and was the last class of marathon day at the World Championships. With both the 7-year old and 6-year old preliminary rounds taking place in the main stadium between 8 AM and 9.30 PM and the 5-year old consolation finals and CDI Intermediaire I and Inter I Kur to Music in the adjoining arena, only the die hard dressage fans could survive the day, heat (32°C) and distance..

Coached by Dorothee Schneider, Laura Strobel deservedly captured first place in the 6-year old preliminary test with a beautiful, smooth round that earned them 8.86 points. The Vitalis x Dancier licensed stallion was presented in such a soft, sympathetic way with an elastic bridle contact. He was super smooth in the trot work without losing balance in the lateral movements. The canter was uphill in every stride and the two flying changes were correct and swinging through the body. Also in walk, the stallion kept a clear 4-beat rhythm and covered much ground. The judges rewarded the horse 8.6 for trot, 8.9 for walk, 9.0 for canter, 8.8 for submission and 9.0 for general impression.

Dutch Adelinde Cornelissen and the Gelderlander bred licensed stallion Henkie (by Alexandro P x Upperville) were rewarded with a second place and 8.76 total score. The bay stallion has developed much and has built muscle. His trot is powerful,  bouncy and big in the extensions. The horse did lack collection, especially in the corners and traversal movements. The rein back was against the hand first, but then Henkie reversed with big steps. The medium and extended trot were impressive, but the nose could have been more out. Also the canter work was ridden with much energy and was up tempo. The first flying change could have been more uphill, but both were correct. The contact with the bit was the biggest issue with Henkie challenging the contact by opening the mouth, and stretching his front lip downward in tension. The judges disregarded all this and saw no major issues in the submission. The big moving Henkie scored 9.2 for trot, 8.5 for walk, 8.6 for canter, 8.5 for submission and 9.0 for general impression.

Spanish Severo Jurado Lopez and Andreas Helgstrand's Hanoverian licensed stallion D'Avie (by Don Juan de Hus x Londonderry) brought star appeal to the Ermelo arena. The chestnut stallion cannot be painted more beautifully and he is lovely in trot, but overall the rhythm was not entirely smooth and even and in the trot lengthenings he hurried too much. There was no bending in the corners on the left lead. The walk was average in rhythm, but in canter D'Avie has a wonderful silhouette. Overall he could have been more closed and collected in the frame in canter, but the changes were good. D'Avie scored 9.0 for trot, 7.5 for walk, 9.3 for canter, 8.8 for submission and 9.0 for general impression to rank third with 8.72 points.

German Stefanie Wolf produced a very strong round on her employer Johann Hinnemann and Thomas Voss' Oldenburg gelding Matchball OLD (by Millennium x De Niro). The tall, long legged black gelding was incredibly lightfooted and rhythmical in trot and he was very consistent and soft in the bridle contact. The canter work was croup high though, despite a very active and engaged hindleg. In the final transition from canter to trot he lost the impulsion though. The judges scored Matchball 8.8 for trot, 8.3 for walk, 8.5 for canter and 8.8 for submission and general impression. They were fourth with 8.64 points.

Diederik an Silfhout and Alexandra Barbançon Mestre's KWPN bred gelding Habana Libre A (by Zizi Top x United) completed the top five with 8.62 points. The chestnut gelding looks very Jazzy and has a snazzy trot with much knee action and articulation in the joints, but it is too passagey and mechanical. Only in the medium and extended trot, as well as in the half passes, did the horse really swing in the back and work through the body. The horse has an electric hind leg and also in canter he worked well with his rider. The extensions were slightly quick in tempo and the horse could stretch the ribcage more . The flying changes went well, the first one was a bit butt high. Habana Libre A scored 8.8 for trot, 7.8 for walk, 8.7 for canter, 9.0 for submission and 8.8 for general impression.

Dorothee Schneider and the Oldenburg mare Sisters Act OLD vom Rosencarree returned to Ermelo this year, but this time the bay mare has a different owner. Austrian horse collector Sissy Max-Theurer acquired the beautiful, feminine looking bay mare and kept it in training with highly acclaimed young horse and Grand Prix rider Schneider. Sisters Act (by Sandro Hit x Royal Diamond) is not the biggest, most flashy mover, but is very correct in her gaits and training. The judges recognize that and scored the horse 8.8 for trot, 8.5 for walk, 8.0 for canter, 8.7 for submission and 8.9 for general impression.

Last year's bronze medal winning Jan Moller Christensen and Kirsten Andresen's Danish warmblood stallion Hesselhoj's Donkey Boy (by ERA Dancing Hit x Milan) finished seventh today with 8.48 points. The pair was last to go at dusk late in the evening. The very tall and refined Donkey Boy has long legs that make him dance in trot, but overall one wishes to see the horse more connected in the back and stronger over the topline. In the extended trots the bright bay covered much ground but was side-stepping with the left hind leg. The extended walk was huge, but the horse could have stretched even more in the contact. The canter was nice, expressive and active, but on the left lead there needed to be more collection. The second flying change was unbalanced with the rider swinging in the saddle and also in the final transition down from canter to trot there was a small hiccup. Donkey Boy got 8.5 for trot, 8.9 for walk, 8.0 for canter, 8.4 for submission and 8.6 for general impression.

Andreas Helgstrand returned to Ermelo with the Oldenburg stallion Ferrari (by Foundation x Hotline) which he obtained in horse sales/swap deal with Luxembourg's Dressage Grand Ducal. The former PSI Auction star has improved much. While last year he was quite long in the frame and slow behind, this year Helgstrand was able to ride the tall stallion in a more closed and collected frame, which was not always easy for the stallion to sustain as he struggled in the mouth. The trot extensions were huge but in the half passes the bay should cross the legs a bit more behind. Helgstrand rode the trot a bit under tempo and more passagey, which improved the self carriage but which looked less natural. In canter the stallion is scopy and engaged from behind. He earned 8.4 for trot, 7.9 for walk, 8.0 for canter, and 8.5 for submission and general impression.

Dorothee Schneider also rode her second horse, Max-Theurer's Oldenburg gelding Flying Dancer OLD (by Furst Romancier x Sir Donnerhall I) into the top ten. The bright bay is a bit underwhelming in his gaits. In trot there could be more articulation in the joints and the hindleg does not really come across and strong and carrying. Also in the collected walk Flying Dancer became tight in the topline. In canter, however, he showed nice strides but relied heavily on the guidance of his experienced rider. The first flying change was tense, the second in two phases. Throughout the test the horse stayed soft and supple in the contact and the judges rewarded more the wonderful training of the horse than his basic ground quality. Flying Dancer got 7.9 for trot, 8.8 for walk, 8.0 for canter and submission and 8.3 for general impression. With 8.20 points he was 9th.

Swedish Grand Prix rider Jeanna Hogberg landed into the top 10 with the Swedish warmblood mare Astoria (by Sir Donnerhall II x Quaterback). The very sympathetic bay mare has much balance in trot, a nice functional walk with a good V-moment in the rhythm and an engaged canter that could have more uphill tendency. The first flying change was short behind, the second better but still tense. They got 8.5 for trot, 8.0 for walk, 7.7 for canter, 7.9 for submission and 8.3 for general impression. They finished 10th with 8.08 points.