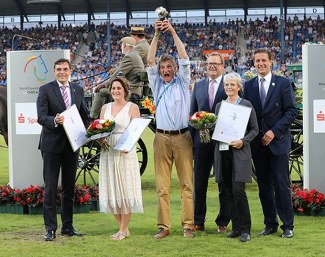 French equestrian photographer Eric Knoll became the winner of the 2018 Silver Camera Award for having taken the best equestrian sport photo of the year.

Equestrian sport has many faces, equestrian sport tells exciting stories and, equestrian sport can be incredibly emotional. The award ceremony of the “Silver Camera” in the Main Stadium at the World Equestrian Festival, CHIO Aachen, certainly proved that on Saturday evening 21 July 2018 when the best equestrian photo of the year was honoured.

His photo shows the show-jumper Philipp Weishaupt together with his horse jumping over an obstacle in the Grand Palais in Paris during the international equestrian show “Le Saut Hermès”, stood out among the 116 entries submitted in total. Knoll already came third in the “Silver Camera” competition last year.

The prizes were awarded by Thomas Pennartz, Executive Director of the Rheinische Sparkassen & Giroverband in Düsseldorf, and Wolfgang Mainz, member of the Supervisory Board of the Aachen-Laurensberger Rennverein e.V. (ALRV).

The famous media prize for the best equestrian photo of the year is conferred annually for the best equestrian photo by the Aachen-Laurensberger Rennverein e.V. together with the Sparkasse Aachen and the Rheinische Sparkassen & Giroverband. First prize receives prize-money to the value of 2,500 euro, the first runner up receives 1,000 euro and the second runner-up 500 euro.