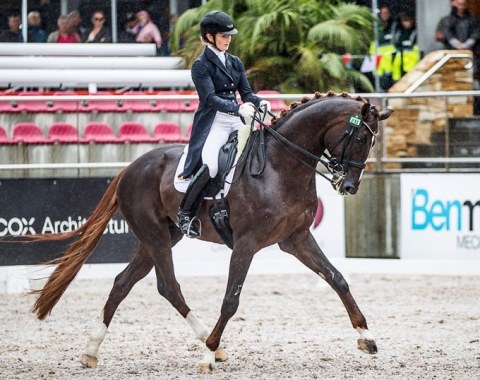 Equestrian Australia (EA) has announced the Australian Dressage Team for the 2018 World Equestrian Games in Tryon, USA, this September.

The Australian selectors have not gone the four highest scoring combinations at their Nominated Events that counted as WEG team selection trials, but have gone for two domestically based riders as well as two European based team routiniers.

“Team selection is based on a range of factors as outlined in the WEG 2018 Selection Policy and includes criteria as required by the FEI.  These criteria include meeting key indicators such as achieving threshold scores during a set period with emphasis on recent scores, the experience of the riders and their potential to deliver, as a team, the best possible result for the team at WEG 2018. All horses also have undergone veterinary examinations and mandatory drug testing,” said Crabtree.

“For WEG 2018, riders based in Australia were given the chance to qualify on their home ground, unlike for previous major events where they were expected to campaign in Europe to be considered for selection.  This initiative created a lot of interest with shows in the lead up period receiving good entries.”

The Equestrian Australia Dressage Selection Panel also confirmed that two riders have been asked to hold themselves in reserve should substitutions be required.

Getting her first FEI World Equestrian Games call up for Australia, Alexis Hellyer, said she was over the moon to be headed to Tryon in September.

The 29-year-old is the youngest member of the team and will ride chestnut stallion Bluefields Floreno (owned by JJ Fuchs).

“It’s pretty amazing, I am a bit lost for words. It’s a surreal thing to have a dream and a goal come to this point at 29 years old,” said Hellyer. “Flo is a young horse and he has an amazing attitude to work and he is super talented and we are impressed with what he is showing us so far. We will grab the opportunity with both hands and run with it and make the best of it. I am so proud to be an Australian selected representative and so pleased with how far dressage has come since I started in it when I was 13,” she said.

It will be the fifth (1994, 1998, 2002 & 2014) occasion that Mary Hanna will be competing for Australia at the FEI World Equestrian Games.  At the last FEI World Equestrian Games in 2014 in Normandy, France, Hanna was bestowed with the honour of being the Australian team’s flag bearer at the Opening Ceremony. The five-time Olympian will be campaigning at Tryon this year with Boogie Woogie 6 (owned by Mary & Rob Hanna). Hanna spends half a year in Europe and the other half at home in Australia.

Europe based Kristy Oatley, who has competed for her country at four Olympic Games and finished 10th for Australia in the team competition at the 2014 FEI World Equestrian Games in Normandy, is looking forward to participating after a strong year of form on the highly competitive European circuit with Du Soleil (owned by Rosalind & Robert Oatley).

Australian Dressage Champion Brett Parbery is looking forward to the opportunity to compete at Tryon with his reigning Australian Grand Prix Champion DP Weltmieser (owned by Susan Duddy).  Parbery is no stranger to the WEG landscape and in Kentucky in 2010 he placed 9th in the Grand Prix Special which was the first time an Australian rider ever recorded an individual top 10 finish at a WEG.