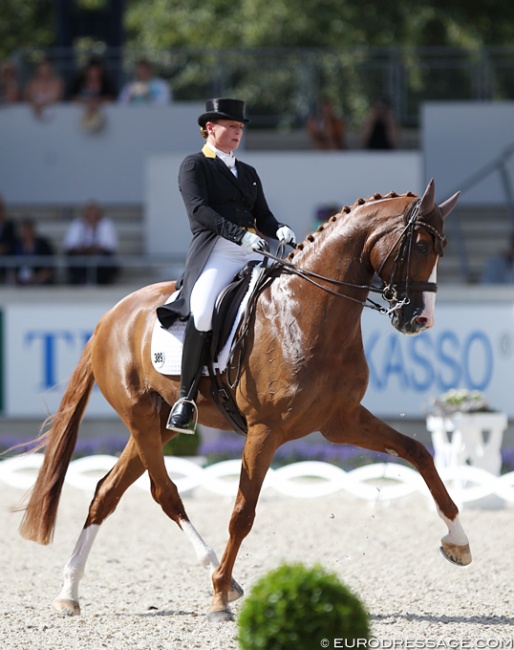 Isabell Werth and her 14-year old Westfalian mare Bella Rose topped the board in the 4* Grand Prix test on the first day of competition at the 2018 CDIO Aachen in Germany, Wednesday 18 July 2018.

The CDIO Aachen is one of the final World Equestrian Games team qualifiers and the 4* Grand Prix class was an important one for riders of several nations to post their last qualification scores and show form in front of their national selectors.

For the Germans, it was especially Werth on Bella Rose and Dorothee Schneider on Showtime who had to produce scores that could put their horses up for team consideration. Both ranked first and second in a class featuring 24 riders in which no real cutting edge riding was delivered.

Werth and Bella Rose (by Belissimo M x Cacir AA) are just in their second show in three weeks time after a 3.5 year break due to injury. The long legged chestnut mare made her show come back at the rather low key and stressfree CDI Fritzens in Austria on 29 June - 1 July 2018. The conditions in Aachen are different, as the world's elite gathers here. Still the event faces several, significant drop outs: German stars Weihegold, Cosmo and Desperados were withdrawn beforehand and three horses did not pass the vet inspection or were withdrawn: Delaunay (Patrik Kittel), Tiamo (Jorinde Verwimp) and Rafaello va Bene (Anne Mengia Aerne Caliezi). During the 4* test Maria Caetano also withdrew Coroado during his warm up.

Three weeks after Fritzens, Bella Rose already showed more routine and fitness even though there were several niggles in the test. The mare had the mouth a bit more closed now and looked more regular in the trot extensions, but they continue to fail the criteria of an actual extended trot: a lengthening of frame and gait. Bella Rose gets quick and can barely step in, let alone overtrack. Yet she draws the attention away from those deficiencies with her far-reaching and flashy frontleg. The trot half passes, however, were brilliant. Overall in trot, the nose had to be more out and she could be lighter in the contact. There was a smooth transition into the piaffe and the first piaffe had good rhythm but she back-stepped with her right hind. The extended walk had two hooves overtrack but the rhythm was mediocre. The second piaffe was early on the marker and the hindlegs not really under, but Werth is always able to get a solid rhythm going. In the canter work several mistakes crept into the ride. The two tempi changes were uphill, but there was a mistake (average score still 5.3), there were two mistakes in the one tempi changes (average score 4.2), the zig zag was well ridden. Both pirouettes were more turns on the haunches with (almost) too many strides (7.4). The final passage was very energetic and expressive but crooked to the left (8.6). Neither the first nor end halt was square. Overall, Bella Rose looked fitter and fresher, but there were more inaccuracies compared to Fritzens.

The judges' panel for the 4* included Christof Umbach, Anne Gribbons, Mariette Sanders-van Gansewinkel, Andrew Gardner, and Katrina Wuest, and they unanimously placed Bella Rose first with 77.587%. Their marks were close together ranging from 77.065% to 78.370%.

Dorothee Schneider made her big come back in Aachen with her 2016 Rio Olympics mount Showtime (by Sandro Hit x Rotspon). The 12-year old Hanoverian was last shown in November 2017 at the CDI Munich Indoor, where he achieved 79.280% in the Grand Prix. In Aachen, however, the horse looked a bit ring rusty. Gabriele Kippert's black gelding still excelled in his passage work, superb extended trots and smooth half passes, but the second piaffe had a bobble and there were mistakes in both diagonals with the tempi changes. The left pirouette was the best one and the final passage on the centerline went smoothly. They finished second on 75.652% with their individual scores going from 73.370% to 77.065%.

German A-squad rider Jessica von Bredow-Werndl and her third Grand Prix horse Zaire E (by Son de Niro x Jazz) landed third place. The bright bay mare is an incredibly elegant, light footed mare, but today in trot she was too hasty and quick, especially in the extensions. The half passes were beautiful though and so was the silhouette in piaffe and passage, but there was some backstepping in the first piaffe. The mare got tense and quick in canter with shorter two tempi changes, but she continued to listen to her rider and do her best. A mistake in the one tempi changes affected the score though. They got 72.609% with marks ranging from 70.652% to 74.674%.

German Fabienne Müller-Lutkemeier landed fourth place on the 11-year old Fabregaz (by Florestano x Ragazzo). The black was a bit slow and out with the hindlegs in passage, but the piaffe was well ridden on the spot. In the extended walk the horse lacked some ground cover and clarity in rhythm, but Fabregaz excelled in his canter with the two tempi changes as a highlight. He received 71.935%.

American Steffen Peters slotted in fifth aboard Akiko Yamazaki's 10-year old KWPN gelding Suppenkasper (by Spielberg x Krack C). The bay gelding showed some stunning trot extensions and half passes, but the piaffe and passage were unbalanced. "Mopsie" is very expressive in piaffe and passage, with great activity and willingness to show collection, but the horse became very unbalanced and wide in front, most visibly on the final centerline. The canter extension was powerful and uphill and the zig zag well executed. The tempi changes were fault-free, but the rider could be quieter with his seat so that the horse swings less with the hindquarters. Suppenkasper showed great ability to collect and sit in the pirouettes, ,  but he was crooked in the flying change at X (due to the rider's position) and crooked in the onset of the right one. They finished on a 71.870% with marks going from 69.891% to 73.152%.

As last pair to go, American Olivia Lagoy-Weltz and the 14-year old Danish warmblood Rassing's Lonoir (by De Noir x Loran) ended up in seventh place. The bay gelding produced smooth piaffe-passage work, despite a slight backstep with his right hind. The extended walk was good. The second passage lacked a bit of impulsion, but the second piaffe was better despite traveling a bit forward. Lagoy rode good trot half passes and nice two tempi changes, but the horse swung in the body in the ones and the right pirouette needed an extra stride. The pair stood out with nice focused riding and the rider having a quiet seat in the saddle. They earned 71.870% with scores going from 69.348 to 74.239%.