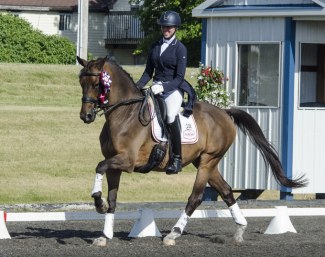 With only two American riders in an all-Canadian field, home athletes stole the show with numerous top-three placings at the Cedar Valley CDI 3*, held June 15-17, 2018, in Cedar Valley, ON.

Megan Lane of Loretto, ON danced her way to victory with Deer Ridge Equestrian’s 14-year-old Dutch Warmblood gelding, Zodiac MW (by Rousseau x Amethist). On June 15, the pair won first place in the CDI 3* Grand Prix with a score of 72.435%. They returned to the ring on June 17 to once again capture first, this time in the CDI 3* Grand Prix Freestyle on a score of 71.925%.

“I am thrilled with Zodiac’s performances this past weekend,” said Lane. “He has really flourished in his new career as big tour horse, and Deer Ridge and I couldn’t be more proud. He presents himself so well in the ring, and I feel extremely privileged to have the opportunity to work with him. We feel this is only the surface of what he is going to become.”

Lane earned additional spots on the leaderboard with her 2016 Rio Olympics partner, Caravella (by Contango x Riverman), a 17-year-old Dutch Warmblood mare she co-owns with her mother, Cathy Lane and sister, Kelsey Lane. The veteran partnership nabbed third place in the CDI 3* Grand Prix with a score of 70.065%, and second place in the CDI 3* Grand Prix Special on June 16 with a score of 71.468%.

Third place in the CDI 3* Grand Prix Special was claimed by Diane Creech and Diana C (by Damsey x Brentano II), the 11-year-old Hanoverian mare she co-owns with Louise Leatherdale, who earned a score of 70.809%.

Dvorak competed in the CDI 1* Prix St. Georges with a second Oldenburg gelding owned by Carla Bahr, 16-year-old Ribot (by Reno x Cor Noir). The pair came in second with a score of 68.333%. Third place in the CDI 1* Intermediate I was awarded to Nancy MacLachlan of Terra Cotta, ON and Judith G. Farncomb’s 11-year-old Canadian Warmblood mare, Dreo (by Dreitakt x Holberg),who scored 68.725%.

Confidently representing Canada’s NextGen athletes was Vanessa Creech-Terauds of Caistor Centre, ON. On June 16, she rode Diane Creech and Louise Leatherdale’s Devon L, an 18-year-old Hanoverian gelding, to win the U-25 Grand Prix with a score of 66.325%.

Creech-Terauds also earned a hat trick in the Young Rider division with her new mount, Harley L (by His Highness 2 x Expri), a 12-year-old Hanoverian gelding also owned by Creech and Leatherdale. The pair captured the CDI-Y Team Test on June 15 with 70.961%, the CDI-Y Individual on June 16 with 70.098%, and the CDI-Y Freestyle on June 17 with 71.833%.

Allison Youngdale of Aurora, ON joined Creech-Terauds on the Young Rider leaderboard. Riding her 11-year-old Danish Warmblood gelding, Ramiro (by  Don Romantic x Rambo), she placed second in the CDI-Y Team Test with 66.765%, the CDI-Y Individual with 68.578%, and the CDI-Y Freestyle with 69.292%. Youngdale also rode her 13-year-old Hosteiner mare, RF Cosima 201 (by Conello x Sir Shostakovich XX), to third place in the CDI-Y Individual on a score of 66.912%. Jade Buchanan of Newmarket, ON represented Canada in the Junior division with Cassandra Jessop’s nine-year-old Oldenburg gelding, Qaro GS (by Quaterback x Florestan I). Her high scores came in the CDI-J Individual on June 16 (67.941%) and the CDI-J Freestyle on June 17 (67.000%).

Achieving great success in the Children’s and Pony divisions was Scarlett Hansen. The Bromont, QC native’s highlight in the Children’s division with her 10-year-old Selle Français pony gelding, Umour de Glatigny (Doppelspiel (De) x Viersen K), came in the CDI-Ch Team Test on June 16 with a first-place finish on a score of 70.833%.