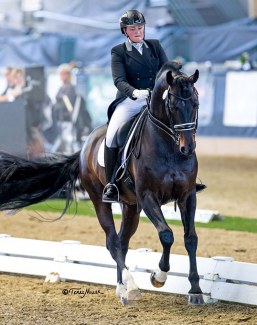 Connaisseur has now tested positive to the WFFS gene.

"We believe the best way to proceed is to take a proactive approach and request that all mares be tested before being bred," said Pocock. "KWPN, along with a handful of other stud books, are now requiring that all stallions be tested which, in my opinion, is not only a positive step forward but also, the best way to manage this and prevent the very unlikely chance of having an affected foal. Please keep in mind, there is no risk to the foal unless both parents are carriers.

"As a breeder and mare owner, I have already started testing our mares and plan to test all of them to be able to make educated stallion choices in the future," said Sara. "As this issue has just become more relevant, please educate yourselves and understand that testing for this defect was not commonly practiced until very recently. Of course, we were not expecting this result for Connaisseur, but know we are taking all necessary precautions to ensure he continues to contribute to performance horse breeding in North America."