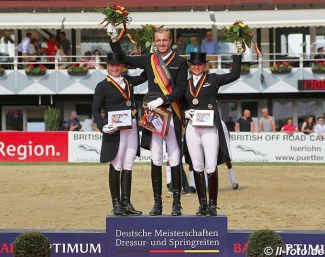 German kid-on-the-block Sönke Rothenberger has beaten the professional dressage dames at the 2018 German Dressage Championships in Balve on Saturday 9 June 2018 and taken his first title as a senior Grand Prix rider. Isabell Werth got silver and Dorothee Schneider ended up with bronze.

Everybody knew this moment was coming and it raises high expectations for a stellar battle at the 2018 World Equestrian Games later this summer: the 23-year old Sönke Rothenberger and his 11-year old Dutch warmblood Cosmo (by Van Gogh x Landjonker) beat the world number one, Isabell Werth on Weihegold, in both rounds of the German Grand Prix championship.

Rothenberger won the Grand Prix with 82.820% and the Special with 83.706% to finish with the gold medal and the title on the highest step of the podium. He could have scored even more in the Special had he not gone off course.

"Already in the warm up I knew that today would be a good day and I am happy that Cosmo was so focused," said Rothenberger after the Special.

Sönke is not a newcomer to German titles: He was the 2014 German Young Riders Champion and 2009 German Pony Champion. Last year he won silver as a senior at Grand Prix level.

Isabell Werth and Christine Arns-Krogman's Oldenburg mare Weihegold (by Don Schufro x Sandro Hit) scored the silver medal on two second places: 82.720% in the Grand Prix and 82.804% in the Special despite a mistake in the one tempi changes. The black mare had just had a break after the 2018 World Cup Finals, getting some embryos flushed for breeding. She looked a bit heavier and not yet as sharp on the job as a month and half ago.

The bronze went to Dorothee Schneider on Matthias Herbert's German Sport Horse bred Sammy Davis Jr (by San Remo x Wenckstern) finished with the bronze. He was fourth in the Grand Prix with 77.620% and third in the Special with 76.804%, ahead of Jessica von Bredow-Werndl on Beatrice Burchler-Keller's rising Grand Prix mare Dalera TSF (by Easy Game x Handryk).

A new set of medals is to be won on Sunday, just for the freestyle. Isabell Werth has withdrawn Weihegold as she wants to spare the mare in the lead-up to Aachen, which serves as German WEG team selection trial.