Showtime No Show at 2018 German Championships 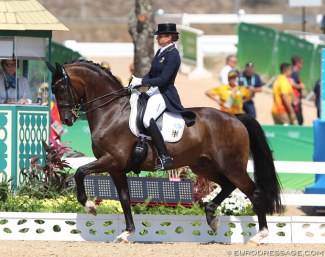 Gabriele Kippert's 12-year old Hanoverian gelding Showtime (by Sandro Hit) has been struggling with an injury since after the Olympics.

In the two years since Rio he has only competed twice: In December 2016 in Salzburg and one year later at the CDI Munich Indoors in November 2017. He has not been shown yet in 2018.

"Showi does not deserve for me to take him to the German Championships because he actually needs more time to present himself in an optimal way," Schneider told Dressursport Deutschland. "Because there are straight away three tests on the programme in Balve. He will get the time and compete again when everything is perfect for him."

German team selector Klaus Roeser rung in on the matter: "When Dorothee has the feeling that Showtime needs more time, than the selection committee absolutely supports that (decision). Horses that don't compete in Balve will not get selection for the Nations Cup at the CDIO Aachen, but for the WEG the die will only be cast after Aachen."

If Schneider wants to be considered for the WEG team on Showtime, she will have to compete him in the CDI leg in Aachen. For the 2018 German Championships she'll be taking her 2017 European Championship and 2018 World Cup Finals mount Sammy Davis Jr.