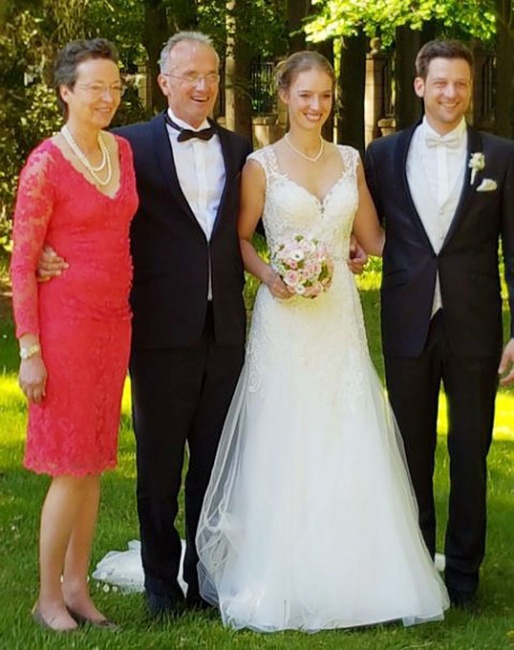 Dutch Grand Prix rider Stephanie Peters had to say goodbye to her former GP horse Jeff. The Jet Set D x Pretendent x Ormand offspring was 23 years old. The bay was approved for the KWPN stallion performance test but never licensed. He was gelded to be focused on sport. Jeff competed at international Grand Prix level from 2007 till 2009. They made their debut at the CDI Braunschweig and did their last international at the CDI Falsterbo in July 2009.

Fabienne Lutkemeier married her fiancé Ingo Müller on 5 May 2018. The wedding weekend started on Friday with the civil ceremony at town hall followed by a welcome evening for the guests. On Saturday the church wedding took place and afterwards the couple left church in a white horse and carriage. The wedding party took place on Saturday night with 125 guests in attendance.  Many riders were presented and the dancing went on until 6 AM. More photos of the wedding here.

Tuzla, the full sister of Adelinde Cornelissen's star horse Parzival (by Jazz x Ulft) has passed away one day after giving birth to a chestnut filly by Dream Boy. The 18-year old  Tuzla was bred and owned by the Beijer family. The mare also produced Eva Rosenthal's Zidane (by Sir Sinclair) and Southern Cross Stud"s Armani, who was briefly competed by Hayley Beresford and then disappeared from the show scene. Tuzla's new born filly is now with a foster mare.

Norwegian Grand Prix rider Siril Helljesen has given birth to her second child, a baby girl named Sara, on 21 May 2018 at 23h 37. Helljesen is married to Sjur Wethal and they already have one daughter together, Stella, who was born on 25 August 2016.

French Grand Prix rider Morgan Barbançon Mestre has welcomed a new addition to her string of horses, the 7-year old Westfalian gelding De Angelo. The chestnut is by Damon Hill out of Lauriebella (by Lauries Crusador xx) and bred by Christian Becks. He was originally a licensed and performance tested stallion, but was never competed in Germany. A full brother to former stallion Daley Thompson and licensed stallion Diamond Rouge HBS, De Angelo has been gelded to focus on sport.   "He's really cool, I think a nice horse for the future," Barbançon told Eurodressage.

Spring is in town and we all know what that means. Sylvie Ferland exemplified it well as molt yeti.

A big blow for Dutch Grand Prix rider Jenny Schreven. Just two days before her international Grand Prix debut aboard her new ride of one year, Zennith, she had to say goodbye to her mare. Schreven took over the 14-year old Dutch warmblood Zennith (by Painted Black x Gagson Winborm x Visioen) from Hiske Geerts last year. She had trained the horse up to Grand Prix level but decided to emigrate to China. Schreven was entered for the 2018 CDI Aachen on Monday 28 May but on the weekend the mare was hospitalized. Her condition worsened and she had to be put down. "She fought till the last second, but couldn't win the battle. We face a complete mystery and are in shock," said a bereaved Schreven. "Beaten, without a chance of winning. It feels so unfair."