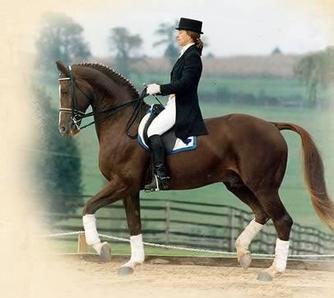 Iron Spring Farm, one of America's leading dressage horse stallion stations and breeding farms, has announced that their deceased preferent stallion Roemer was a carrier of the Warmblood Fragile Foal Syndrome (WFFS) gene.

"We tested all of the stallions currently breeding commercially (cooled or frozen) after Hilltop announced about Sternicht," Iron Spring Farm's breeding director Meghan de Garay told Eurodressage. "They were all negative. That list was Consul, Contango, Florianus, UB40, Uno Don Diego and Sir Sinclair. We also tested all of our broodmares and all (were) negative."

The Westfalian bred Roemer (by Pilatus x Cyrano x Flietner) was born in 1975 and passed away in 1996. He was KWPN approved and a preferent sire.

Iron Spring Farm still has frozen semen of Roemer and had it tested for WFFS just like their entire stallion roster.

"I tested some frozen semen from stallions we had in our tanks and only use for ourselves," De Garay explained. About two weeks ago Roemer was tested and he returned positive as a carrier.