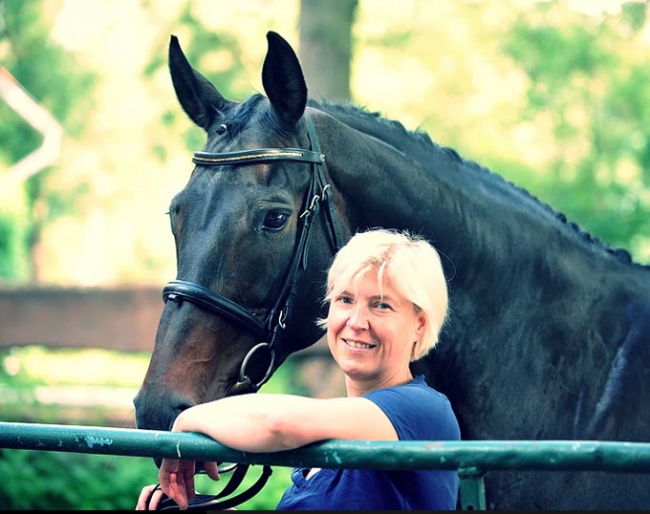 Kareen Heineking-Schütte is our guest columnist of the week. Veterinarian Heineking-Schütte is the managing director of Germanhorseconnection, a breeding, training and sales facility in Raddestorf, Germany. With her veterinary practice she focuses mainly on reproduction and rehabilitation of sport horses. Kareen weighs in on the Warmblood Fragile Foal Syndrome (WFFS) which is captivating the breeding world at the moment.

The reason I remember first hearing about WFFS is because this exam in 2000 coincided with the first day I performed a D-Mark into Euros conversion. I admit this bit of active knowledge did not survive its vet school exam deadline and I neatly stacked it away onto the pile that already held malign foul brood of the bees or infectious hematopoetic necrosis of salmon, labeled "diseases not requiring urgent attention". It was thus pushed down into the abyss of unused information for the next 15 years during which I didn't hear a single noise about it despite being a vet and running a stud farm in the heartland of sport horse breeding.

Fast forward to 2015 when I met Dr. Bärbel Gunreben at a convention and learned about the study she and her team had conducted in 2012. She mentioned that Laboklin had been offering commercial testing for this defect starting in 2013 and that she was surprised they had seen little to no interest from warmblood breeders and registries which she attributed to the low quota of statistically one in 400 foals being affected based on the 9.4% prevalence of carriers they had found in her work.

While I made a mental mark I did not follow up on the matter. After all the chances were marginal compared to all the more imminent things that can and will go wrong in breeding. Besides I had not encountered a clinically affected foal in my practice and locally knew only one senior colleague who reportedly had. There was no talk at any of the veterinary conventions either.

My attitude changed when Hilltop went public about Sternlicht being a carrier in the wake of Mary Nuttall losing her foal. I have since tested all my mares and learned that two of them are carriers which I immediately published in the Facebook WFFS group. After not getting anywhere asking around for n/n tested stallions I began collecting cases and test results from clients and other breeders through the internet so in order to pool them for confidential use (meaning I can do a risk-assessment without publishing an individual mare or stallion's status). From a commercial point of view this defect clearly is a non-issue: Based on the available data (~10% carriers) your cost of testing a 100k population of breeding horses will be roughly 5 million euro all included (shipping, managing your data, paperwork and laboratory expenses). The expectable number of homozygous foals out of those 100k will be 250 which means each of these lost foals would have to sell at 20k Euro above cost to compensate for the testing expense which is simply not realistic in sport horse breeding.

Nonetheless I say testing is worth the effort for a variety of reasons. Animal welfare and avoiding the tragedy of losing a pregnancy or worse yet a newborn foal are obvious and reasonable arguments. We have also learned from the HERDA-experience (a similar but not identical disease in American cutting Quarter horses) that prevalence may easily skyrocket in populations when management fails and carriers are bred intensely due to superior traits which unfortunately was the case with HERDA: Roughly one third of cutting bred Quarter Horses are HERDA-carriers in today's population because the line of "patient zero" was all the rave in cutting horse breeding over three decades. The other aspect is jurisdiction. In my country (Germany) it involves liability-, trade- and animal welfare law. §11b of the animal welfare act explicitly prohibits (in simplified terms) to mate two vertebrates when they are at risk to produce deficient offspring that will suffer. The paragraph was originally established to prevent extreme traits in pets however horses and farm animals are inarguably vertebrates as well so there is no reason why it should not apply to them. Foals affected with WFFS inarguably suffer during their short lifespan. They practically fall apart alive, can usually not stand on their own and there is no cure so they all have to be euthanized.

Whether or not horses or equine semen should and can be sold under consumer law can certainly be debated and should be discussed among law professionals. However as it stands here customers purchasing goods from professional sellers can assume 'customary quality' of the product unless other arrangements are made. With a genetic defect affecting less than 10% of the population you can hardly call it a 'customary' quality so there will be a lot of room for unpleasant legal quarrel unless sellers inform their clients beforehand and get a waiver. I would therefor strongly advise professionals to run a qualified legal check on their terms and procedures. As testing is possible with any intact cells there is nothing that prevents a mare owner from having semen tested at their own expense. Whether or not it is legal to publish such a result is not clear, nobody has determined yet who owns animal DNA.

With several major international stallion owners going ahead announcing to test their stock and some registries jumping the proverbial gun and with mandatory testing it will be interesting to see if others will follow. The trouble is you won't tackle the problem with just testing the stallions. This is not a defect that affects only a few bloodlines. It has been present for a minimum of approximately 170 years and is extremely widespread. Carriers have been identified in places so remote from the cradle of warmbloods as New Zealand. With roughly 10% carriers it would be unwise to try and remove the carriers from the breeding population because it would result in a massive loss of desirable traits and huge economic impact on owners of affected animals. Many of the most sought after lines are affected in both dressage and jumping and there is no studbook reported free of the defect, not even Trakehner or Holstein. If only stallions are tested mare owners are led to a false sense of security thinking the defect will soon disappear if only they avoid using carrier stallions. It won't because there are a lot more mares breeding than stallions and each and any carrier mare has a 50% chance again of passing it on to her offspring even if you stick to using free stallions. The carrier percentage might go down but they don't have to if the carriers are outstanding (most of them are that's why the defect is so widespread). This was what happened with HERDA. In my opinion the key is to tackle this in the next couple of generations. Smart breeders will test their mares and try to eliminate it from their program by keeping preferably non-carrier fillies even before mandatory testing for stallions is established. The same holds true for the stallions: Keep using carriers and chose from the best sons preferably those who are non-carriers.

In the future health management in breeding populations could be a lot easier with genomic profiling. We are in year 10 after the first equine 50kSNP-chip became commercially available. Genomic profiling has been used to improve health in farm animals for decades. It has also been vastly used to develop genetic breed values in Icelandic horses, French trotters and Endurance breeding. There really is no viable excuse why we don't use it in sport horses to improve both soundness and performance. Instead we still juggle around with flawed numbers and 'estimated' breed values that are more often than not way off base or even counter productive. KWPN's "OC index" is from my point of view more of a well orchestrated marketing plot than an effective tool to achieve better population soundness. There are flaws in how the learning sample was collected to begin with and all it shows is that economic impact is considered a great deal more important than soundness. KWPN sees no issue with publishing breed values that have as little as 30% reliability which means they are less reliable than tossing a coin. Yet KWPN has at least something while Germany has been struggling to put up any kind of system to date. The soundness database registries and FN have been working on for over a dozen years is still not up and running and has shrunk from a project that should provide breeders with direct information to a concept where owners can chose whether or not they want their horse to participate. Besides nobody has come up with a plan as to who will pay for it. And again most of the discussion revolves around X-rays and/or OC, an issue that is fairly manageable. X-rays are useful but only as a diagnostic tool in clinical problems. They are not reliable to predict the athletic future of a clinically sound horse. We should be a lot more concerned with career ending soft tissue lamenesses, stress resistance, guts and respiratory soundness. As a vet and breeder I am way more interested in genetic diversity, I am interested in fertility and the quota of early losses, the history of horses who don't even make it to licensing or riding age. Those are where the most grave economic losses and the worst heartaches sit for a breeder. Registries should mind their members' interest and their members are the breeders not the buyers. As long as registries fund themselves from foal registrations and sales commissions we will keep having a massive conflict of interest. They don't economically benefit from a horse that can perform beyond 25yrs. They benefit from high numbers of registrations and quick turnover. I call it the fridge dynamic. When I was little a fridge would easily last 15-20 years. Today's fridges often break after 3-5 years so you have to buy a new fridge.

Breeders are facing skyrocketing costs over the last 20 years. Stud fees used to start out at 500 DM (250 euro) to cover your mare for a season. Today they are more often than not 1000+ Euro right away and the most sought after swimmers sell for hundreds, even thousands of Euros per one straw of frozen. Registration of your foal used to be less than 100 DM, today you're out 150-250 Euros until all is said and done. All other horse-related costs have gone through the ceiling as well. In this kind of environment it is not surprising that breeders become are more demanding and no longer willing to accept what has been considered "natural losses" for generations. Today everybody has more choices. More choices go with increased responsibility which you can either take or deny. And responsible breeding starts with selecting the parents. Both parents.