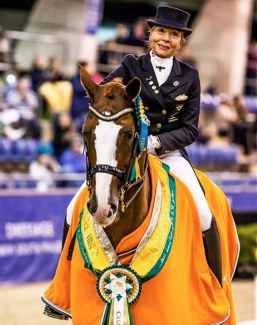 Aboard Vicki Newham's Diamond Star, Judy scored 72.620% in the grand finale class of the 2018 CDI Sydney, the Grand Prix Kur to Music. She was more than one per cent ahead of Deon Stokes and the Royal Olymp stallion, Royal Oak II, on 71.315%. Shannan Goodwin riding Aristede was third with 70.480 per cent.

The top six competitors in the Grand Prix Freestyle all scored in excess of 70 per cent.

Dierks said she was “so happy” about the win, as well as the new  surface in the Sydney International Equestrian Centre's (SIEC) indoor arena.

“I'm so happy that I got to see in my lifetime a fabulous surface here,” she said during the presentation. “Thank you so much for that.

It was a repeat of Friday's performance for Judy and daughter Daniella, who both came off wins to also take out their respective freestyles. Daniella and her German imported stallion Solo Feliz won the Intermediate Freestyle CDI3* with 75.100%.

Daniella was also presented with the John Lieutenant Memorial Trophy for 2018, which is awarded to the individual horse and rider combination obtaining the best three official scores in the PSG, Intermediate I, and Intermediate Freestyle, or Grand Prix, Grand Prix Special and Grand Prix Freestyle.

Daniella started the day early with a win in the Intermediate I CDI3* on Solo Feliz. They were only the second combination into the arena for the class, however managed to hold the lead throughout.

Placing first with all five judges, the combination's score of 71.529 per cent was enough to put them more than 2.4 per cent ahead of second place-getters, Sheridyn Ashwood and the Fidertanz stallion, Fiderfurst, on 69.088 per cent.

Daniella said she was impressed with “Solo's” Inter I performance, particularly as he had a very early start to the day.

“I was really impressed with him, being such an early start … in the indoor with the lighting and all these other things that we have to worry about as riders,” she said. “I really had no issues. He was on the aids, and I was super happy with his personality and temperament for that situation, because he is still quite young.”