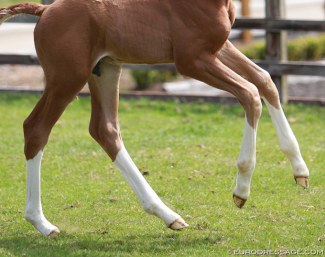 Guest columnist for this week is American Kathleen Kirsan who weighs in on the spiked awareness of Warmblood Fragile Foal Syndrome in North America, while in Europe veterinarians appear to be clueless to the disease. Between 2011 and 2013 WFFS has been tested on European horse stock and 11% proved of the tested group turned out to be carrier!

The breeders of warmbloods here in North America have suddenly discovered a hidden mess in their gene pool. Warmblood Fragile Foal Syndrome, also known as WFFS, came home to roost in the American gene pool and erupted in the news of a tragic live birth of a colt with the fatal condition. On the surface it appeared to be an anomaly—a freak occurrence, but it is not.

This disease has been around for some time, and by 1984 the scientists in Europe were noting cases of it but were unable to identify it. It was understood quickly that it was similar to HERDA (hereditary equine regional dermal asthenia) and once that condition in Quarter Horses was isolated in the genome (2004 University of Davis) and a test for it was developed with a joint effort of UC Davis and Cornell University in 2007 (which became commercially available in 2009), then the cases in Europe were tested for HERDA, but curiously they always came back negative.

Finally in 2011 the scientific team led by N. Winand published that they were able to find the gene responsible in the equine genome and so WFFS was brought to light. This team of scientists then proceeded between 2011 and 2013 to test populations in Europe for the condition in order to patent their genetic test for it. They found one test group of European warmbloods came back 11.11% carriers, and a second test group of 500 German warmbloods came back with a 9.5% . (The genetic test was commercially available in 2013).

What this translates for us is that approximately 10% of the European warmbloods carry this defect...that was in 2013, it could be much higher now, however, especially if the carriers were popular breeding stock, like Poco Bueno was in the Quarter Horse. HERDA reached 28% of the entire breed of Quarter Horses before they were able to test for it and control its spread. The test results so far for WFFS in North America are approximately 12% positive (AnimalGenetics).

So here we are in 2018 with a similar issue in the warmblood breeds and their resultant bloodlines. The problem is compounded by the lack of information being passed on to the breeder. Europe has been aware of this disease in their gene pool since 2013, yet the identity of the “Poco Bueno of Europe” has not been disclosed making this fatal time bomb able to spread undetected until a double carrier lives until birth. A carrier does not contract the disease, it requires the gene coming from both parents to manifest, and it is always fatal, most never reaching birth, ending in miscarriage or abortion. It is very rare for a live foal to be born.

So how do we clean up this mess? To eliminate this trait completely from the breeding population would require barring all carriers from breeding. If however, you find the bloodline is to valuable to abolish, then Arnie at AnimalGenetics.us (where you can order the test) recommends: test your stock, identify the carriers and never breed a carrier to a carrier---that is how the HERDA plague was managed and turned around.

Kathleen Kirsan is a sport horse breeder, pedigree specialist and equine writer on breed history, pedigree design and sport bloodlines. Her work has appeared in magazines, trade journals and her books : North American Sport Horse Breeder, Legacy of Lexington and Standardbred Sport Horses, plus on her informational website www.sport-horse-breeder.com