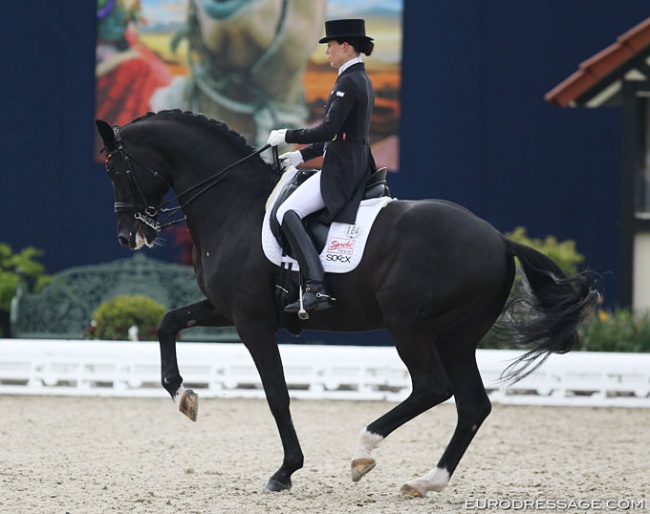 After a double victory at the 2018 CDI Dortmund in March, Kristina Broring-Sprehe re-confirmed her show come back on the 17-year old Desperados FRH by claiming the Grand Prix for Kur at the 2018 CDI Hagen "Horses & Dreams" competition at Hof Kasselmann on Thursday 26 April 2018.

The second day of competition at 2018 Horses & Dreams Meets the Royal Kingdom of Jordan" had all the ingredients of a typical April spring day: crispy temperatures and rain in the morning, followed by a mixture of overcast sky and a piercing but cold sun, then more rain showers, a bit thunder rolling down the hills, more rain, some wind, some sunshine and for the last rider of the day a torrential down pour that took six minutes.

The majority of Grand Prix riders rode in dry weather and so did Kristina Broring-Sprehe on Desperados (by De Niro x Wolkenstein II). The combinations displayed their impeccable training even though there were still some beauty errors here in there in the test. Sprehe rides her stallion with long reins and overall the poll needs to be consistently higher, but Desperados is a smooth operator and showed off wonderful trot extensions, half passes and an extended walk. The second passage was not very even with the right hind dragging, but the one on the centerline was spot in. One of the piaffes was too static and lacked suspension even though the stallion has much show and lift. The rein back had six steps instead of five and the horse changed behind at the end of the extended canter. The zig zag was good, the pirouettes a highlight, yet the final halt wide behind.

The panel of judges, which included Plewa, Tissot, Hoevenaars, Eisenhardt, Smeets, were thrilled and rewarded the test with a strong 79.109%. Her individual marks ranged from a realistic 77.174% to an enthusiastic 80.652%.

“I had a super feeling,” said Kristina Bröring-Sprehe. “Desperados was very relaxed and focussed. German team trainer Monica Theodorescu was all smiles and quick to praise the rider. “We mustn’t forget that it’s not just Desperados who had a break, Kristina hasn’t ridden a Grand Prix test for one and a half year either and it is remarkable how precisely and flawlessly she completed the test today," she said.

Spanish Severo Jurado Lopez and Marianne Helgstrand's 15-year old Hanoverian gelding Deep Impact (by De Niro x Rubinstein) last competed in December at the 2017 CDI Stockholm and this was their first international outdoor start. The black gelding showed huge trot extensions but lacked bending in the corners, the half passes could have been more smooth in the rhythm. The first piaffe-passage was beautiful and the walk tour was well regulated. In the side silhouette Deep Impact is very expressive with a super engaged hindleg. However the frontal image shows that the horse widens the frontlegs significantly to find balance in passage.  Jurado Lopez rode a very focused and accurate test. In the one tempi changes the horse made bigger changes to the right. The left pirouette was lovely but in the right one the gelding lost his balance. They finished second with 75.152%. Their scores ranged from 73.913% to 77.283%.

Swedish Patrik Kittel showed much progress on the Oatley family's 12-year old Oldenburg gelding Delaunay (by Dr. Doolittle x Feinbrand). The bay gelding looked more comfortable and pleased in the work and was less tilted with the head. The trot extensions were fluent, the half passes smooth and the first and second piaffe-passage well ridden with a regular rhythm, even though the horse still gets wide in front in piaffe. The extended walk had much overtrack. Unfortunately in the canter work Delaunay still leans a bit on the forehand and it would be great to see more uphill tendency in the zig zag and one tempi changes. The pirouettes were small though. They ranked third with 75.109%.

Danish Daniel Bachmann Andersen and the 10-year old Dutch stallion Blue Hors Don Olymbrio (by Jazz x Ferro) show progress with each outing. Although Bachmann is slightly too tall for the liver chestnut, they paint a pretty picture. In piaffe the stallion has great sit and takes after grand sire Ferro, in passage he still needs to engage the hindlegs more under the body. In the trot half passes he covered good ground and the rein back was well executed. The extended walk was not the scopiest, but the rhythm was clear. The two tempi's were uphill and the pirouettes small. They slotted in fourth with 74.087%.

Routinier Fabienne Lutkemeier and her 18-year old Hanoverian D'Agostino (by De Niro x Shogun xx) made their miles count. Member of the 2014 WEG team, this duo always scores in the straight tempi changes, trot extensions and extended walk. The chestnut has a good rhythm in piaffe and passage, but never truly sits in piaffe. In the zig zag he covered less ground to the right but the pirouettes were clean. They completed the top five with 73.413%.