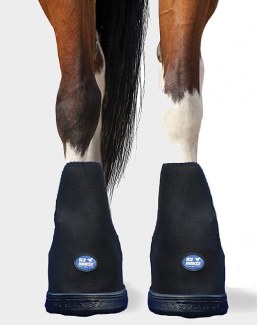 Something as serious as Laminitis needs the best treatment there is. A new study from The Department of Clinical Studies, New Bolton Center, School of Veterinary Medicine, University of Pennsylvania confirms IceHorse’s dry cryotherapy is a much more effective cold therapy treatment than ice water buckets, gels or compression-based cold therapies.

And only IceHorse has Cold Capsule® ice packs that surround and cool inflamed tissues more than 3 times longer than gel packs or icy water buckets long enough and cold enough to actually make a real difference.

There is a need for a practical, affordable, dry cryotherapy method that effectively cools the digit. The objective of this study was to evaluate the hoof wall surface temperatures (HWSTs) achieved with a novel dry cryotherapy technology.

Equine cryotherapy studies that report hoof temperatures below the target of 10°C involve wet applications or compression tech- nology.1 2 4 9–11 Although no complications are reported in these cryotherapy studies using wet application methods, there are anecdotal reports of cellulitis, local tissue necrosis and softening of the hoof wall, particularly in horses with concurrent systemic illness.12 Ice immersion methods also require a conve- nient source of ice and are labour-intensive. Compression technology avoids prolonged water submersion but can be cost-prohibitive and cumbersome to apply.11 Dry applications offer several potential advantages with ease of application and lack of prolonged tissue submersion.

Cryotherapy was applied to six horses for eight hours with a commercially available rubber and rubber and welded fabricice boot, which extended proximally to include the foot and pastern. Reusable malleable cold therapy packs were secured against the foot and pastern with the three built-in hook-and-loop fastener panels. HWST and pastern surface temperature of the cryotherapy-treated limb, HWST of the control limb and ambient temperature were recorded every five minutes throughout the study period.

Dry application of cryotherapy significantly reduced HWST and reached minimums below the therapeutic target of 10°C. This cryotherapy method might offer an effective alternative for digital cooling.

The purpose of the study was to measure the hoof temperatures achieved using a novel commercially available ice boot and cold therapy packs that are affordable and practical to use in a clinical setting. The researchers hypothesised that hoof wall surface temperatures (HWST) in limbs treated with this dry application ice boot would be lower than in control limbs, with a minimum below the target of 10°C and below 18.7°C, which is the lowest temperature reported for other dry cryotherapy methods.

Each horse underwent a single cryotherapy trial between June and August 2016 that started in the morning and lasted eighthours. The left front foot was placed in a commercially available rubber and welded fabric ice boot (Big Black Boot; Henry Schein), which extended proxi- mally to include the pastern, without an acclima- tion period. Reusable cryotherapy packs (Cold Capsule Technology; Ice Horse, MacKinnon Products, Sonoma, CA, USA) were cooled in a standard residential style freezer (approximately −20°C) overnight and recooled for a minimum of twohours before reuse. Cryotherapy packs were secured against the foot with the three built-in hook-and-loop fastener panels such that the cryo- therapy pack was in direct contact with the limb. The cryotherapy packs (Cold Capsule Technology; Ice Horse, MacKinnon Products) are commercially available with the boot (Ice Horse, MacKinnon Products).

These cryotherapy packs consist of a casing made from biaxially oriented nylon film of polyamide resin and linear low-density polyethylene filled with a freezable mixture of water, propylene glycol, triethanolamine 99 per cent, polyacrylic acid and quaternium-15. This design was modified from previous cold therapy packs used by the company to provide dry contact cryotherapy to the foot and pastern region with a malleable ice pack, which allows intimate contouring to the limb. After initial over- night freeze, two sets of three cryotherapy packs were used in each trial, alternating them between the freezer and the cryotherapy boot every twohours. This resulted in replacement of the cryotherapy packs every twohours throughout the study.

Cryotherapy was well tolerated and no adverse effects were noted at any point in the study. There was a single instance where the cryotherapy boot required resetting five minutes before scheduled cryotherapy pack replacement due to displacement of the boot relative to the hoof. Displacement of the boot did not disrupt the data collection. Cryotherapy pack surface temperature after overnight freezing was −14.2±2.3°C. Surface temperature quickly warmed to 7.65°C±2.6°C 10 minutes after removal from the freezer. After a two-hour refreezing period between uses, surface temperature reached −6.7±0.9°C, which was significantly warmer (P<0.001) than after an overnight freeze.

The cryotherapy method used in this study has the advantage of avoiding tissue submersion, the need for ready access to free ice and the cumbersome proximal attachments associated with other currently validated methods, while still achieving a median HWST of 11.1°C with minimums below 10°C in the treated hoof. Potential complications of dermatitis, cellulitis, tissue necrosis, limb oedema and softening of the hoof wall have been anecdotally reported in horses with continuous immersion methods Although the focal temperature at the surface of the cryotherapy pack during the initial 5–10minutes of this cryotherapy method was potentially quite low (below 7.65°C±2.6°C observed at 10minutes), no complications associated with focal tissue damage were observed in this study. Dry applications offer the advantage of avoiding direct skin contact with ice and prolonged immersion in water and allowing regular inspection of the limb with cryotherapy pack replacement, while achieving significant decreases in HWST.

Take the hassle out of cooling a horse's hoof! Unique tri-fold design wraps the horse’s foot in ice from the Coronary Band to the toe, providing cold compression therapy for the treatment of Laminitis and relief for stressed hooves or sore feet with no watery mess. Ice packs Velcro® directly onto boot—no more fiddling around with pockets.

The boots have a non-slip rubber sole features ability to use with your choice of pad or wedge and the ice packs are reusable. When you are done, simply place your packs back in the freezer. Within hours they are ready to use again.