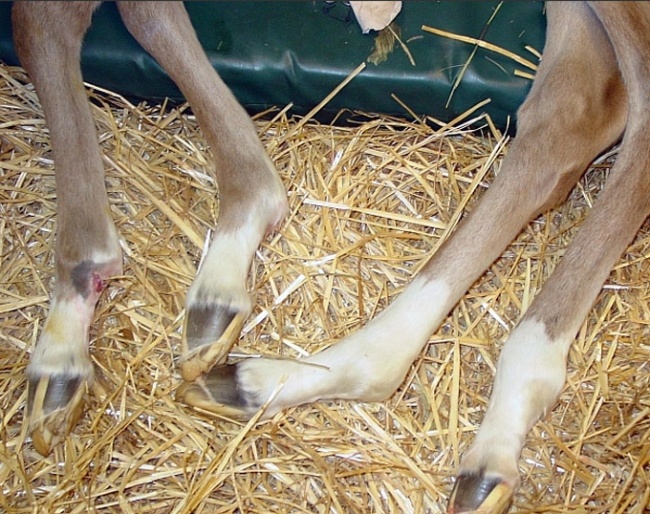 Breeders and stallion owners in the United States have raised major concern about warmblood stallions passing on the Warmblood Fragile Foal Syndrome (WFFS). Hilltop Farm in Colora, MD, has recently pulled Sternlicht from their roster as he is a carrier of the disease. Major American stallion stations have now begun systematic testing of all their stallions.

What is Warmblood Fragile Foal Syndrome?

Warmblood Fragile Foal Syndrome (WFFS) is an inherited systemic connective tissue disorder that is found in Warmblood horses. Foals can have extreme skin fragility that lacks tensile strength and is often characterized by tearing or ulceration from normal contact with surroundings. Limb joints are extremely lax, affected foals cannot stand normally, and they must be euthanized soon after birth.

Warmblood Fragile Foal Syndrome is reported only in Warmbloods. The incidence of carriers is approximately 10%.

Results of the genetic test for Warmblood Fragile Foal Syndrome (WFFS) have shown horses to either be "clear" (horse tested negative for WFFS), "carrier" (horse is positive for the WFFS mutation but will not develop symptoms) and "affected" (horse carries two copies of the WFFS mutation and will die of the disease).

With recessive genetic disorders like Warmblood Fragile Foal Syndrome (WFFS), two copies of a recessive gene must be present for the horse to exhibit signs of the recessive defect. Horses with only one copy of the defective gene are considered "carriers" and do not have any symptoms associated with WFFS.  A foal can only be affected with symptoms if the foal inherits the disease from both parents.

Warmblood Fragile Foal Syndrome (WFFS) has passed under radar because most mares abort their embryos/foals affected with WFFS. Very rarely is a live, affected foal born.

In response to an owner's request to breed a mare that was a known carrier of Warmblood Fragile Foal Syndrome (WFFS), Hilltop Farm recently has the genetic testing done on all their stallions.  All tested stallions were negative except for Sternlicht (by Soliman de Hus x Rascalino x Wesley), who tested positive as a carrier of WFFS.

"In four years of breeding Sternlicht we know of no cases of WFFS affected foals," a Hilltop farm press release stated. "Current estimates are that between 6% and 11% of the Warmblood population are carriers of WFFS, but testing is not common and to-date there has been an overall lack of discussion about the disease or testing."

"With the state of genetic testing in its infancy, the sport horse industry has not yet had an open discussion on recessive traits like WFFS," Hilltop continued. "Other breeds and registries are far ahead of us in dealing with similar situations related to recessive traits and genetic testing. Time is needed for education about WFFS, discussions on the use of genetic testing and how it will influence our breeding decisions going forward, and the role and position of the warmblood registries in these circumstances.

Hilltop pulled Sternlicht from their roster. "We have chosen to remove Sternlicht from this year's stallion roster as we investigate the ramifications of this and other similar situations related to recessive traits and genetic testing," they said.

In the U.S.A. stallion owners are now beginning to systematically test their horses, so more results should be surfacing in the coming weeks.

"We hope that by coming forward and openly announcing this discovery, we can be a positive catalyst for how we as an industry move forward," Hilltop concluded.