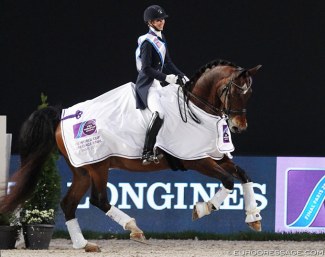 American star duo Laura Graves and her 17-year old Dutch warmblood Verdades have added a second important, psychological notch to their belt by beating the undefeated German pair Isabell Werth and Weihegold OLD for a second time in their career in the 2018 World Cup Finals' Grand Prix class which took place in the Accor Arena in Paris, France, on Friday 13 April 2018.

Werth and Weihegold have been the unbeatable pair in 2017, winning the World Cup Finals, European Championships and Aachen Grand Champion's title. Only once did Werth not cover first place, in the 2017 Aachen Grand Prix Special last July. They were beaten by Laura Graves and Verdades, and the charming American did it again today in Paris!

Electric Verdades Preferred by the Judges

After an impressive winning streak at the Global Dressage Festival in Florida this first three months of 2018, Graves flew her Florett As x Goya offspring to Paris for her second World Cup Finals in her career. Moving from outdoor showing to an indoor venue is a challenge to most of the horses and while loyal Verdades trusted on the guidance of his rider, the horse appeared quite hot to trot. They were fault-free and supreme in the class, but not at their best yet.

They began their test with top class half passes and very ground covering trot extensions. The extended walk was also good. The piaffe and passage, however, were throughout the ride too electric. It is easy to get impressed by the horse enthusiastically picking up his legs and in passage almost reaching the belly with incredible engagement but it all looked too hectic. Also in piaffe, Verdades is still not taking weight on the hind legs in the correct, classical manner and got unbalanced and hurried in the rhythm. In the canter work, Verdades definitely impressed with his tempi changes (the ones are breath taking!), very sweeping zig zag and tiny pirouettes, but in the extended canter he loses clarity in the 3-beat rhythm which Graves cloaks by starting to collect the horse right after X. Overall, Verdades is very light and soft in the hand, which generates a very friendly image, but he could stretch a bit more into the contact and keep the mouth closed.

The judges were thrilled with what they saw. In Florida, however, the sympathetic gelding looked much more comfortable in piaffe-passage than in Paris, but the panel of seven - Verbeek (NED), Judet (FRA), Baarup (DEN), Alonso (MEX), Foy (USA), Eisenhardt (GER), and Maknami (RUS) - considered this Laura's best ride ever. They rewarded the pair with a personal best score of 81.413% and with individual marks ranging from 79.130 (Eisenhardt) to 83.587 (Verbeek).

Friday the 13th for Weihegold

While the tall, Gelderlander cross bred Verdades radiates power and gumption with his ground covering gaits and pleasant demeanor, Isabell Werth's smaller black mare Weihegold seemed minute in the Paris atmosphere with her normal walk and trot. Fortunately, as soon as the 13-year old Oldenburg mare (by Don Schufro x Sandro Hit) picks up the passage, one knows where the high scores come from. Today, however, Werth and Christine Arns-Krogman's Weihegold were far from winning form.

There was hardly any overtrack in the first and second extended trot and although there is very good crossing of the legs in the half passes, the mare loses suspension. The rein back was good. The first passage was fantastic with smooth transitions into a good piaffe. In the extended walk there is just one hoof overtrack  and Weihegold does not have the very best clarity of rhythm. The passage had a few uneven steps because the mare sneezed, but the piaffe was nice, and the transitions super fluent. A very poor canter strike off and edgy two-tempi's followed. The mare changed on the diagonal right before the extended canter and there was a mistake in the one tempi changes. The zig zag did not have the most ground cover and the pirouettes were small but flat. The final passage was engaged and lightfooted but the mare got slightly crooked to the right.

Isabell did not show her A-game in the Grand Prix and the judges had her at 78.261% with scores going from 75.00 (Judet) to 80.652% (Verbeek). Overall it has to be said that the marks of both top two placed riders were at least two percent too high. Verdades' hectic pi-pa work and Weihegold's mistakes and lesser quality basic gaits were not really reflected enough in the scores. Nonetheless the rivalry between these two top riders and them swapping places on the board make up for the best dressage sport imaginable.

"It feels very scary, especially with such a fierce competitor because I know she’s going to ride even harder tomorrow," Graves said about having Werth behind her instead of in front. The ever witty Werth joked, "well since we are in France I just say, c’est la vie!” about her second place, knowing well enough that she thrives on competition and is expected back in the arena tomorrow with a knife between her teeth.

When asked how Verdades copes with the indoor environment, Laura explained that "luckily he is such a hot horse, but he's very honest. I was worried about the size of the warm up, but it ended up being just fine. Once he came into his 20 x 60 arena I can count on him no matter how hot he is." Werth explained that Weihegold was also hotter than expected. "I had not planned that she would become so hot in canter. It was a little surprise to me. It happened, it wasn't planned, but tomorrow we'll try to make it as hard as possible for Laura and hope to perform without mistakes."

Initially Werth contemplated bringing Emilio instead of Weihegold to the World Cup Finals. When asked if she regretted that decision, she quipped, "rien ne va plus. If I were to call Emilio at home, he would tell me, 'hey it's your fault.' I hope Weihe will show tomorrow it was the right decision to take her."

Germany continues to be the measure of all things with the other two of their qualified riders capturing places three and four! Since the 2016 Olympic Games in Rio, Germany's team riders have been on an unbroken winning streak at the (inter)continental championships.

Jessica von Bredow-Werndl and Beatrice Burchler-Keller's 17-year old Dutch gelding Unee BB (by Gribaldi x Dageraad) seem to have a subscription to a World Cup third place. After finishing third at the 2015 and 2016 WC Finals, they are now back in third place in Paris. The pair started the test with sweeping half passes, although Unee loses some elasticity in them. The trot extensions were ground covering and forward but in the second one, he dropped a bit deep in the contact. The same happened later on in the extended canter. In passage the stallion is regular, but the hindlegs lacked push. The second piaffe was the best of all even though he lost the rhythm for a moment. Unee produced straight tempi changes but he could cover more ground in the ones. The pirouette left was beautiful, the right one a bit sloppy. They scored 75.668% for third place .

'I feel very happy with the third position and will try my best to stay there," von Bredow-Werndl commented. "This is Unee's last World Cup Finals and we have a very difficult freestyle. The only thing I can do is to give my very best tomorrow."

Dorothee Schneider brought Matthias Herbert's 12-year Sammy Davis Jr (by San Remo x Wenckstern) to Paris and finished fourth in the Grand Prix. The refined and long-legged gelding showed clean half passes. The first passage could have been more regular and in piaffe the horse showed the movement wasn't effortless by baring the teeth. In the extended walk there was hardly any overtrack and the rhythm was poor, but the second passage was clearly better although Sammy Davis Jr back-stepped twice in the piaffe. The tempi changes were neat, the left pirouette slightly counter-bent. The right one was much better, but bigger. The horse lost the trot right before the final centerline. They posted a 75.311% on the board.

Swedish Patrik Kittel and Marie Haward's 14-year old Swedish warmblood mare Deja (by Silvano x Don Schufro) followed in fifth place. The feminine bay mare showed sweeping trot half passes but could have been more up in the bridle. The trot extensions are powerful and ground covering. Deja is lightfooted in the passage, but the piaffe remains to be her "bête noire". She gets wide in front, losing balance and self carriage. Kittel tries to ride the absolute minimum amount of steps to avoid mistakes, which highlights the problem even more. The one tempi changes were scopey, the zig zag huge but slightly laboured in the changes, the pirouettes were small. They finished on 74.689%.

Danish Daniel Bachmann Andersen and the 14-year old Dutch warmblood licensed stallion Blue Hors Zack (by Rousseau x Jazz) were third to go today and were the first to produce an impressive score on the jumbotron. The half passes had flow and energy, the trot extensions were ground covering, but the stallion should open the frame even more instead of hurrying. The passage was bouncy and engaged, but in piaffe the stallion creeps forward and he got crooked to the left. The piaffe at X was the best one. The zig zag and the one tempi changes were powerful. They earned 74.130%

Further Down the Line

Russian Inessa Merkulova did not have her stunning Russian Trakehner Mister X (by Egeus) as sharp as in Dortmund, but the rider stayed more quiet in the saddle, which generated a more pleasing and friendly silhouette. The gelding has a world class piaffe and passage, but today the passage was not entirely even at all times, and in piaffe he began to back step a bit. Still the Russian rider stayed very focused, rode small pirouettes, and was more quiet in the saddle in the tempi changes. It was a quite clean ride and they were rewarded with 74.115%.

The highest scoring Dutch rider in the Grand Prix was Madeleine Witte-Vrees on her husband and J Cuppen's 11-year old KWPN stallion Cennin (by Vivaldi x Donnerhall). The chestnut stallion continues to impress in the extended walk, trot and canter, but unfortunately today the rider was very restless with her hands in the half halts. The pirouettes were smaller though than before and also in piaffe Cennin showed more willingness to sit behind.  They finished 8th with 73.975%.

Dutch Edward Gal and Gaston Glock's 10-year old Danish warmblood stallion Zonik (by Zack x Romanov) were the hot candidates for the third place at the Finals, but today Gal had to work hard on his young, black stallion, who was not always in front of the aids. The trot extensions were powerful and big, the half passes had super ground cover and the extended walk had plenty of overstep. Also in passage the horse showed much bounce and potential, but in piaffe he leant on the forehand and pulled the hocks high. In canter work, Zonik became deflated and Gal toiled in the last part of the test. The horse dropped out of passage before the canter strike off, there was a mistake in the ones, and Zonik switched lead before the right pirouette, which was crooked. They finished 9th with 73.758%.

The Grand Prix Kur to Music, which counts for the final ranking in the World Cup Finals, takes place on Saturday 14 April 2018. The class starts at 14h.

Text and Photos © Astrid Appels - No Reproduction Allowed - Contact us if you are interested in obtaining photos for websites, social media and prints!