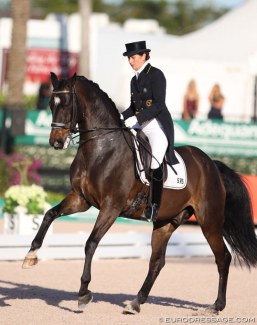 Swedish Olympian Tinne Vilhelmson-Silfven has withdrawn from competing at the 2018 World Cup Finals in Paris, France, next week. Her horse Paridon Magi is not fit to compete. The pair will be substituted by French/Spanish Morgan Barbançon Mestre.

"Magi had a bad tying up reaction yesterday evening, he is not fit to travel ore compete," Vilhelmson told Eurodressage. "We are so sad, looked so much forward to go to Paris. Magi is better today and we will monitor him closely and hope for quick recovery."

The pair placed 11th on the Western European League World Cup ranking and initially missed out on a spot to the Finals as first reserve. They were ranked 64th on the February edition of the FEI World Riders Ranking List. In March they climbed up to 55th place.