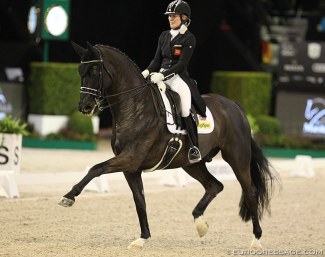 The suddenly vacant spot caused quite some discussion as to who would take the berth. According to FEI rules the Pacafic League spot goes to the 2nd placed rider at the Pacific League World Cup Final in Boneo in case it is not taken.

The second placed rider is Alexis Hellyer (on Bluefields Floreno as she finished second at the PAL finals held at the 2018 CDI-W Boneo in Australia. She scored 71.545% to finish second in the Boneo Kur to Music.

Hellyer, who of course did not fly her horse to Europe in the unlikely case she would need to substitute for Hanna, was not asked by the FEI if she was interested in taken her rightful spot at the World Cup Finals.

"no I have not been formally asked," Hellyer told Eurodressage, adding that she would not have accepted anyway. "I feel it’s a bit late as far as getting everything organised etc."

In case the second placed PAL rider does not take the spot, the FEI has as rule that the spot will be considered an "extra starting place" and then FEI rule 5.2.3 applies: "If more starting places are available,these will be allocated to the athlete/horse combination(s) with the highest ranking (as a combination) on the February of the current year FEI World Dressage Ranking List (WRL), and who have participated in at least two (2) CDI-W."

After initially rejecting her request for an extra starting place with dubious explanations that the timing for request was not right and then stating that she did not fulfil the criteria for a starting place, the FEI asked Cathrine Dufour if she wanted to substitute for Mary Hanna as she is the highest ranked on the WRL who participated in two CDI-W.

Dufour declined, as she thought it was too last minute now to prepare her horse for the Finals

"Yes FEI asked me, but 4 days was too shot a notice for me," Dufour told Eurodressage. "I’m so sad they didn’t ask before, but that’s life. It would have been fun though. Still the World Equestrian Games are the big goal."

The FEI then went down the line and invited Steffen Peters with Rosamunde to Paris, but he also turned down the offer. Peters and Rosamunde will be flying to Europe in June for the CDIO Rotterdam and Aachen and according to Dressage-News felt that two trips to Europe would be too much for the horse.

The next in line on the World Ranking List was British Hayley Watson-Greaves who has accepted to ride her 14-year old Rubin's Nite (by Rubin Royal x Limbo) in Paris. They finished 13th on the Western European League ranking and were ranked 40th on the WRL at the end of February.