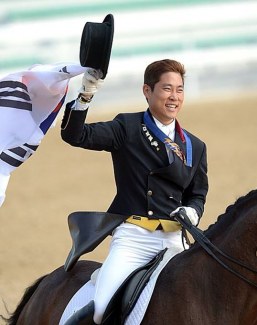 Despino is bred by Ulrike Lahrmann-Gehrke and is by De Niro out of Wallone (by Wolkentanz I x Forrest xx x Western Star).

1996 German Olympic team rider Martin Schaudt acquired the bay gelding as a 4-year old at the 2007 Klosterhof Medingen auction. He trained the horse to Grand Prix level and won the first round of the Louisdor Cup Qualifier at the 2012 CDI Hagen. The pair also became the Baden Wurttemberger regional champions at Grand Prix level.

In the summer of 2012 Schaudt sold Despino for a six figure amount to Rhinelander amateur Grand Prix rider Ute Kröger-Rück. Unfortunately the horse did not work out for Kröger-Rück and a legal battle ensued. However, a settlement was reached and Despino returned to Schaudt's barn.

Despino returned to the show ring in October 2017 under Jasmine Schaudt. She competed him once at a local show in Bisingen-Hohenzollern and placed second in the Grand Prix behind Isabelle Steidle on Long Drink.

Korean Young Shik Hwang, who has been training with Schaudt for more than four years and who has moved to live in Balingen, Germany, has leased Despino as his  Olympic hopeful.

"I will not try for 2018 Asian Games," the Korean told Eurodressage. "I will stay in Germany till 2020, so my plan is the Tokyo Olympics."

The pair made its show debut on Despino at the national show in Zeutern, Germany, last weekend and scored 66.667% in the Intermediaire II (16th) and 66.047% in the Short Grand Prix (14th place).