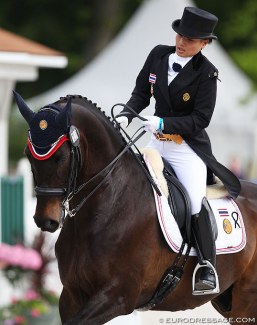 Princess Siri has been an active dressage rider on the Western European scene. After completing a formative training at the French National Equestrian Centre(ENE) in Saumur, Siri continues to train in France with Grand Prix rider Jean Philippe Siat.

In order to have a second iron in the fire, the Thai Princess has invested in a younger FEI level horse, the 8-year old Franchise (by Sergio Rossi x Olivi), as a second 2018 Asian Games hopeful. The black gelding spent the last year in training with Norwegian Grand Prix rider Anne Lene Holmen in Germany.

"Franchise is a beautiful, expressive horse who really catches the eye in the show ring," said German horse dealer Jochen Arl who brokered the sale of Franchise to Thailand. "The two make a wonderful combination and I wish them much success in the future."

Aboard the 18-year old Hanoverian bred Prince Charming WPA (by Prince Thatch xx World Cup I) she has been campaigned in Europe as of 2014 as CDI's in Saumur, Deauville, Lamprechtshausen, Darmstadt, Saumur, Compiegne, Roosendaal, and Fritzens. She rode for Thailand at the 2014 Asian Games in Incheon and at the 2017 South East Asian Games in Malaysia she earned team silver.  For Asian riders the 2018 show calendar has the Asian Games as biggest highlight of the year. They will take place in Jakarta, Indonesia, in September 2018.

Sirivannavari splits her time between France and Thailand, where she designs a high end fashion line.