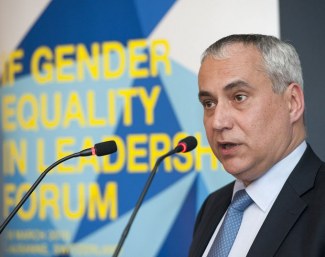 Ingmar De Vos, President of the Fédération Equestre Internationale (FEI), equestrian sport’s global governing body, focused on the power of sport to promote gender equality as he welcomed delegates to the opening of the third IF Gender Equality in Leadership Forum in the Olympic capital, Lausanne (SUI) on Tuesday evening 28 March 2018.

Jointly organised by the IOC and the Association of Summer Olympic International Federations (ASOIF), the IF Gender Equality in Leadership Forum (27-28 March) addressed the bold recommendations of the IOC Gender Equality Review Project launched by the IOC on International Women’s Day (8 March) and published today, gender-balanced representation in sports governing bodies and how to avoid gender bias.

IOC President Thomas Bach gave the keynote address, speaking on the HeForShe solidarity movement, which was created by UN Women, the United Nations organisation dedicated to gender equality and the empowerment of women.

“The FEI and equestrian has an exceptional quality - we consider ourselves the Olympic champions of gender equality, but equestrian is in fact gender neutral because there is no gender division in our sport,” explained FEI President and IOC Member Ingmar De Vos.

“Female and male equestrian athletes compete on the same stage for the same medals, from grassroots to the elite level, and while this is totally normal for everyone in our sport, it is obviously totally unique to everyone looking in on equestrian.

“Sport is one of the most powerful platforms for promoting gender equality and empowering female athletes, so while equestrian does have this unique gender balance, we absolutely see the necessity to continue increasing female participation and define policies in the administration of our sport globally to ensure women carry on leading our sport.”

“As governing bodies, we all have a responsibility to bring awareness, to champion change and to lead on issues which are far greater than our original sporting remit,” he continued.

“We can remove the barriers that have maintained a status quo for longer than we want to admit. Why, because our core business is sport - and sport can be and is a catalyst for change.

“Sport also has the ability to transform lives and communities, because equal access and opportunity is a fundamental right, because it is our duty to promote and encourage best practice at all levels of our sport.

“The FEI is working closely with the IOC, ASOIF and the UN to set goals that will positively impact women in our community around the world.”