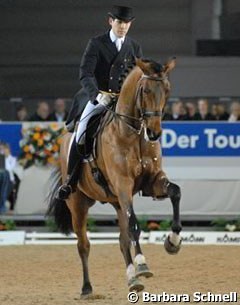 Bred by Kai Gerken, the Holsteiner was by Cambridge out of Esther (by Liostro).

He was initially owned by Swiss Samuel Schatzmann and very briefly ridden by Lisa Wilcox in 2005. In 2006 he moved in training with Patrik Kittel who showed him nationally and once internationally until the summer of 2007.

Cinque Cento then sold to Korean Samsung team. In 2007 and 2008 he was competed by Korean Jun-Sang Choi and their campaign culminated in the 2008 Olympics in Hong Kong, where they finished 45th.

In 2009 he sold to Morgan Barbancon and she showed him at small tour level in 2009 at CDI's such as the Sunshine Tour, Addington, and Saumur. She also competed him at Grand Prix level nationally in Holland in 2011, before retiring him from sport.

"He was retired with us and lived a happy life with Ahorn, Mr.Q and Nelson," Barbançon told Eurodressage. "He was special to me, since he was the first Grand Prix horse I rode. He was a cool pumpkin! He taught me to love the our sport at the higher level; my first piaffe steps and one tempis.

The horse spent his retirement in good health in the field near Stable Korenbloem in Weert, The Netherlands. Cinque Cento died of natural causes, most likely a heart attack.