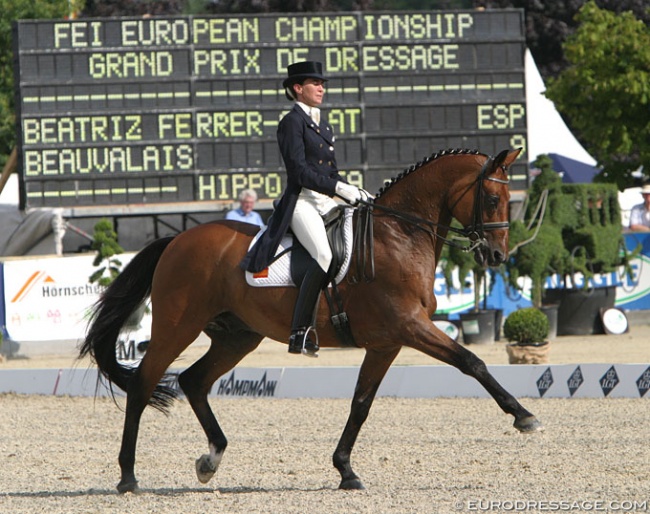 The Hanoverian branded Beauvalais was bred by Friederike Schulz-Stellenfleth  and was by Bolero out of Galante (by Grande x Marcio xx x Duellant).

As a youngster he was first competed by Heike Kemmer, who took him from M-level in 1994 to Grand Prix in 1996. She rode him at national and international Grand Prix level through 1998.

Beauvalais was scouted by Frank Lamontagne for Beatriz at Dirk Haese's barn in Warendorf, Germany, in July 1999. The horse was known for not being easy, having through Brazilian Dr. Jorge da Rocha out of the saddle.

With the help of Belgian born trainer Jan Bemelmans, Beatriz and Beauvalais became a thriving partnership.

Although Brilliant took Beatriz to her first Olympics in Atlanta in 1996, it was Beauvalais who defined her career. Ferrer-Salat became the first Spanish rider to bring absolute glory and success for her country in the discipline of dressage.

The long-legged bay gelding was retired in 2007

In 2014 a fit 27-year old Beauvalais was presented to the public in a special honorary ceremony at the CDI Barcelona. The bay Hanoverian spent his retirement at Beatriz' Vila Equus near Barcelona, Spain.

The past few days Beauvalais struggled with colic and could not be saved.