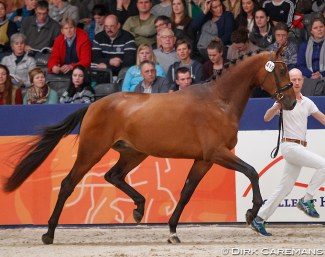 Fifteen of twenty-five entered stallions were accepted by the KWPN licensing committee to begin their 2018 KWPN Spring Stallion Performance Testing in Ermelo, The Netherlands.

The colts, who were approved in the third phase at the 2018 KWPN Stallion Licensing in Den Bosch in February, had their first opportunity to be performance tested at the spring testing, which began today 19 March 2018.

The licensing committee reviewed 18 colts under saddle and 15 of them were allowed to the testing.  King Schufro (by Don Schufro) x Jazz) was considered not ready for training by the committee as he resisted several times in the under saddle presentation. Adri Zekveld, owner of Kairouan Sollenburg (by Electron x Metall)  decided in agreement with the committee to withdraw his colt, and Kandour (by For Romance x Uphill) was not fit but can be re-presented next week.

One colt, who was rejected in the second phase at the 2018 KWPN Licensing, was entered for the performance test as a "volontary participant". Gaston Glock, who recently bought the colt from E.A. Nijland, had his Dutch team present his King Karim (by Toto Jr x Painted Black) under saddle and the licensing committee liked what they saw, so he was accepted for the testing.

Four 4-year olds were entered, but only two showed up: Jakarta (by Five Star x San Remo) and Joop TC (by Ravel x Krack C). They have to return on 4 April for a second presentation after which they might be accepted for the 50-day testing. The biggest absentee was the third ranked premium stallion of 2017, Jewel (by Ferdinand x Santano), who was already sent home at the testing last year. He did not show up in Ermelo today.

The 15 stallions that have begun the 2018 KWPN Spring Performance Testing are: