Jovian and For Final, High Scorers at the 2018 Stallion Sport Test in Verden 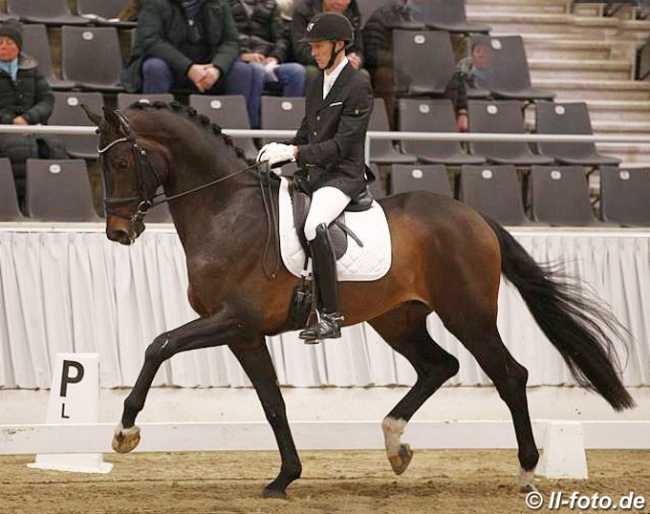 The 4-year old Dutch warmblood stallion Jovian and the 5-year old Oldenburg stallion For Final became the high scorers at the 2018 Stallion Sport Testing in Verden, Germany, on 2 - 3 March 2018.

An impressive list of stallions was entered for the Verden sport test, where Olivier Oelrich provided the commentary and Philipp Hess did a commendable job in test riding the youngsters on the second day.

In the 4-year old division, Andreas Helgstrand's KWPN bred Jovian (by Apache x Tango) became the clear high scorer as the extravagant mover was the only one to score over 9.0. Jovian, which Helgstrand bought in Holland from a Swedish owner last November, scored a total of 9.01. He got 9.5 for trot, 9.3 for canter, 7.5 for walk, 9.5 for rideability and 9.0 for general impression.

The second highest scoring 4-year old was the much hyped and highly debated Baden Wurttemberger stallion Secret (by Sezuan x St. Moritz). As the sport test does not take flaws in conformation into consideration, the beautiful Secret shone with his expressive gaits and flashy knee action. He scored 8.7 for trot, 9.2 for canter, 8.5 for walk, and 9.0 for rideability and general impression, to finish on a total of 8.88.

The Oldenburg Finest Selection (by Follow Me x Lauries Crusador xx), who beat Secret at the 2017 Bundeschampionate, was the third best scoring 4-year old with a total of 8.74 points. The black got 8.5 for trot and 8.8 for walk, canter, rideability and general impression.

The Oldenburg licensing champion Furst Fabrice (by Furstenball x Sandro Hit) made a public come back in the Verden sport test and scored 8.3 total. The 2015 Westfalian licensing champion D'Egalite (by Don Juan de Hus) finished on 8.01 points with

For Final On Top

The Oldenburg For Final (by For Romance x Dimaggio) was the highest scoring 5-year old in a group of 11 participating stallions. He scored a total of 8.2 under Stella Charlott Roth. The horse got 8.3 for trot, 8.1 for canter, 8.5 for walk, 8.0 for rideability and 8.2 for general impression.

Gestut Staffelde's Danish bred Trakehner Helium (by Millennium x Induc) finished second with 8.15. The black got 8.0 for walk, trot, canter and general impression and 8.5 for rideability.

The Hanoverian bred Frascino (by Furst Wilhelm x Don Frederico) achieved the third highest score in the 5-year old group. This black stallion got 8.4 for trot, 7.8 for canter, 8.3 for walk, 8.0 for rideability and 8.2 for general impression.

The starters lists in Verden was action packed but not all stallions made it to the finish line.  Twenty colts ended up participating in the testing and 18 completed it. Janeiro Platinum (by Sezuan) and Feinrich (by Furst Heinrich x Sir Donnerhall) were a no show despite being entered. The Trakehner Pac Man (by Rheinklang x Latimer) was withdrawn from the test after the first day. Don K (by Don Nobless) was excused when the chestnut turned up unlevel.