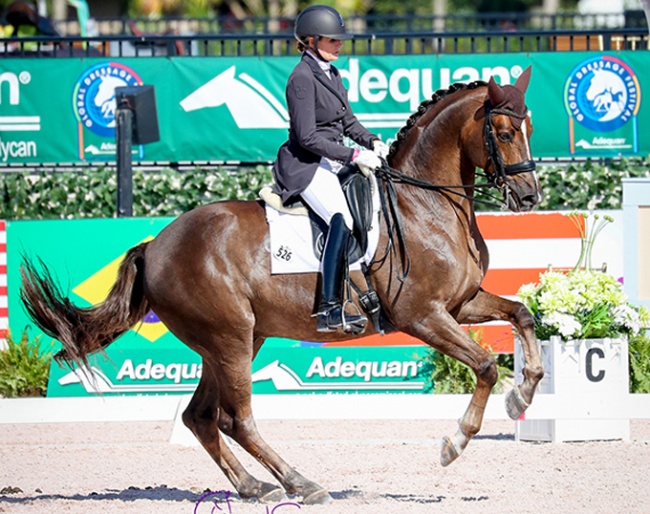 Canadian born American Ashley Holzer recorded Sir Caramello’s first ever international grand prix win in just his fourth CDI test, topping the Grand Prix Special 3* at the 2018 Palm Beach Dressage Derby in Wellington, Florida, on a score of 70.149%. They were the only combination to break through the 70% barrier in the class of 13 finishers in week eight of the 2018 Global Dressage Festival.

The class was sponsored by PJ Rizvi’s Peacock Ridge, which was fitting as she is also the owner of the winning horse. Holzer was flabbergasted to win, having finished seventh in the qualifying grand prix. Sadly she was not able to attend the prize-giving as she had to leave to catch a flight to Toronto.

“I’m speechless,” said Holzer. “This horse has been on the most incredible journey. Never in a million years did I think he’d win — I thought we might do a 65% test. But I’ve just watched the video back and some of the things he did in that test were unbelievable. And he whinnied at me for this first time in his life this week; I’m feeling very emotional about it.”

Indeed, the liver chestnut gelding’s extravagant movement and uphill frame command attention in the ring. At only 11 years old, the horse still has plenty of time to gain confidence, and Holzer blamed the only big blip — a miscommunication in the passage to canter transition at X — firmly on herself.

“I timed the canter aid completely wrong,” she said. “He is such a power machine and he’s been challenging to bring on. Andreas Helgstrand once described him as the most talented but most difficult horse he’d ever seen. He was sold at the PSI auction in 2011 as a four-year-old [for €500,000 to Russia], then ended up with Patrik Kittel, who called PJ and I about him.

“It’s been hard for him to balance his huge gaits and then close up again for the collected work; that’s taken a long time to develop,” she added. “I also got some last minute advice from Robert Dover and Carl Hester yesterday — about taking my time in the corners, and not worrying about him being too ‘up’ in the frame.”

Holzer credits Rizvi’s patience and understanding as an owner for allowing her the time she needed to turn the horse around.

“PJ’s been behind him 100% of the time and, believe me, we’ve had some major lows with convincing him that everything would be okay,” added Holzer. “This win is testament to the importance of having a supportive owner who understands these things — so it was fitting she was the sponsor of the class.”

Holzer plans to show Sir Caramello (by Sir Donnerhall x Feiner Stern) in one more CDI at GDF before whisking him off to Europe for the summer.

Katherine Bateson Chandler — another to benefit from British Olympian Carl Hester’s advice on-site — was second with Alcazar. The local rider was nip and tuck on the trending scores with Holzer until small mistakes crept in in the two sets of one-time changes. The finished on 69.979%. Like Holzer, she plans to spend the summer in Europe, training with Hester.

The top non-US rider was Canadian Olympian Megan Lane, who rode Deer Ridge Equestrian’s Zodiac MW, by Rousseau, to 67.915% for third place. The winner of the qualifying grand prix, the Dominican Republic’s Yvonne Losos de Muñiz, had to settle for sixth place aboard Foco Loco W.

In the Intermediate I 1*, Spain’s young talent Pablo Gomez Molina made it two wins from two starts with Yeguada de Ymas’ 10-year-old mare Finest, a Westfalian by For Compliment. He also finished third in the class on Ulises De Ymas, with Germany’s Michael Klimke (Diabolo) splitting the 24-year-old’s two rides. Gomez Molina, who is competing at GDF for the fourth consecutive year, scored over 67% on both his rides in the 11-strong class.