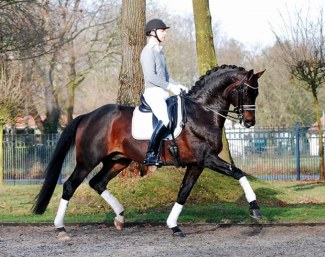 The Dutch owned Brandenburg licensed stallion Samba Hit II has been leased to the Brandenburg State stud in Neustadt/Dosse for the 2018 breeding season.

With the sudden passing of Samba Hit I on 11 February 2018, Neustadt/Dosse was interested in continuing to represent that gene pool at their stud. Samba Hit II is like his deceased full brother by Sandro Hit out of Poesie (by Brentano II x Gotland x Sekurit).

Neustadt/Dosse stated: "With the death, Samba Hit I leaves a big hole behind so we hope that Samba Hit II can pick up again his very positive performance from his first breeding years in Brandenburg-Anhalt and follow in his brother's footsteps."

In 2010 Samba Hit II sold to Belgium to Lisperhof Horses (Verhesen family) as a junior rider's prospect for then pony rider Charlotte Verhesen. He was briefly shown by Verhesen's coach Mieke Lunskens in 2011, but then the dark bay stallion completely disappeared from the show scene; only to pop up sold and standing at stud at the Dutch stallion station De Ijzeren Man in Weert, The Netherlands.

Owner Bjorn van Kessel has now decided to lease the stallion to Neustadt/Dosse as there is little interest in Samba Hit II in The Netherlands.

Samba Hit II's full brother number III is in the U.K., while IV is still listed as owned by the Brandeburg state stud (ridden by Jutta Bintru) and V seems to be in Canada with Rochelle Killberg.