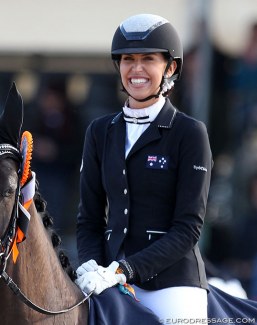 Danish based Australian Grand Prix rider Simone Pearce has fractured her arm and hand in three places after falling off a horse. Her chances of riding in Herning on 7 - 11 March 2018 are slim.

"Unfortunately I fell off a young horse and landed badly," Pearce told Eurodressage.

One of the leading assistant trainers at Andreas Helgstrand's stallion station and sales barn in Denmark, Pearce has a big date on her schedule in two weeks: the 2018 Danish Warmblood Stallion Licensing and CDI in Herning, Denmark, where she was scheduled to ride five horses.

"I should have Wladimir OA in the CDI Grand Prix, Zhaplin the Danish Warmblood Young Horse Final, For Emotion and Valverde in the stallion presentation and one 3-year old stallion in the licensing," Pearce explained. "I am hopeful that maybe I can still manage riding Zhaplin as so much time and preparation has gone into it, having had him since he was three years old."

Pearce just spent two months in Wellington, Florida, as part of the sales team of Helgstrand Dressage U.S.A.. The 5-year old Zhaplin was shipped there as a poster boy of the sales barn and to be sold, but has now returned to Denmark to compete in the 2018 Danish Warmblood 5-year old Championship, held annually in Herning.

The Herning event is one of the biggest indoor equestrian events in Europe. They are hosting the licensing, a CDI, the Danish warmblood young horse championship for 5-year olds, and a big gala show in which breeding stallions are show cased.

"Thankfully they are good clean breaks and I have negotiated with doctor for a re-examination in 7 days and if given the all clear I can ride a small amount very carefully at Herning and build up again to more strenuous riding after that," Pearce wrote on her Instagram. "Keep your fingers crossed for a miraculous recovery."

To Eurodressage she added, "but I won't push the arm if it isn't ok according to my doctor. It would also be great to get to ride Wladimir as I am going for my final qualification score for WEG, but at the moment it's all very uncertain unfortunately."