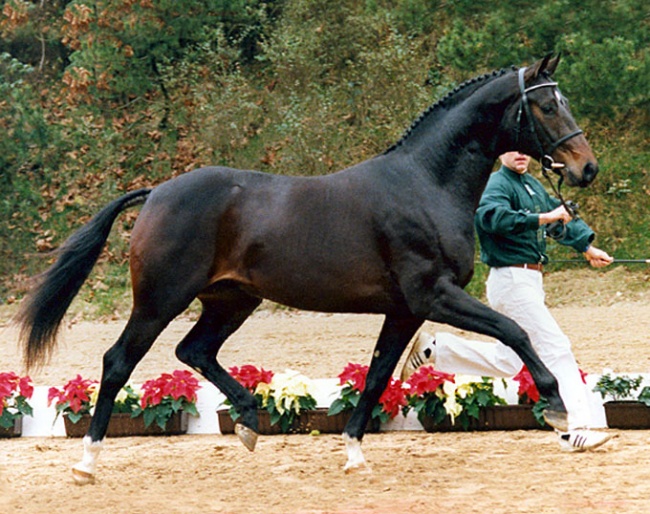 The Oldenburg licensed breeding stallion Donnerschlag has passed away at his home in Santa Rosa, California, on 14 February 2018. The stallion was about to become 31 years of age in spring.

Donnerschlag was licensed at the 1989 Oldenburg Stallion Licensing. Owned by Gestut St. Ludwig, he became a foundation sire at the stud in Wegberg, Germany.

Under Heiko Munzmaier, Donnerschlag made his show debut as a 6-year old in Duisburg-Hamborn at L-level. He finished 16th in the Finals of the 1993 Bundeschampionate, then held in Mannheim, after winning the first round. In 1995 the horse moved up to small tour level and in 1997 he did his first national Grand Prix. Donnerschlag competed in his last show in June 1999 at S-level back in Duisburg-Hamborn and finished third.

In 2000 Donnerschlag sold as a 13-year old to Sue Curry Schaefer. The stallion severd a small tour schoolmaster and competed in the U.S. at local events. He did two classes in 2005 (under Jessica Miller), three classes in 2008 (Caitlin Casey) and one class in 2010 (Riana Porter).