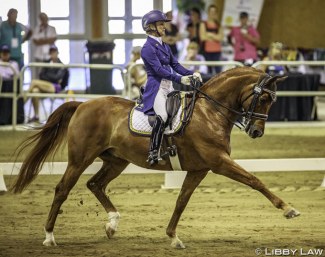 Brougham and Vom Feinsten (by Fidermark) scored 69.913% to take out the CDI 3* Grand Prix at the NZ Dressage Championships with fellow WEG hopeful John Thompson (Hamilton) and Antonello second. In his first CDI of 2017, Thompson and the 16-year old Antonello scored 68.37%.

Brougham was rapt and particularly because four of the five judges – 5* Eddy De Wolff (NED), Ricky MacMillan (AUS), Elke Ebert (GER) and Sue Hobson (NZL) – each gave her higher than 70%. “That is very encouraging for me,” said Brougham.

Brougham acknowledged her horse had done better Grand Prix tests – including a 73.16% at Masterton in January – but she was still pleased. “I think today he was a bit flatter, which had a lot to do with the surface. He doesn’t go as well when he sinks in. There were little things today that we could have done better, but on the whole he knows his job and just gets on and does it.”

She was now looking forward to the Grand Prix Special tomorrow. “It’s nice to get that final mark ticked off now.”

Brougham represented New Zealand at the 2016 Olympics with a 44th place and 68.543% score in Rio. Her chestnut injured himself after Rio and needed more than a year to come back to show shape. Their return show was the CDI Boneo in Australia in October 2017. The Nationals in Fielding are their four event and second CDI since Rio.

Wendy Hamerton, ESNZ’s sport manager and the dressage chef d’equipe for WEG says it is great to see the potential coming through. “Julie and John both put in really good scores, but clearly there is the potential to be scoring higher than these marks as their campaigns progress with more consistent competition,” said Hamerton. “I am really excited about the potential of Wendi’s second horse as well, I think they were the big improvers today. He is a horse with a huge amount of potential but just not as much experience.”

All the riders in the Grand Prix had made little mistakes here and there, and Hamerton said Thompson would be ruing his which was probably the difference between first and second.

“It was an expensive error for him,” she said. “All of the four top placegetters though showed some pretty starry bits and I am sure they will all be better in the Grand Prix Special tomorrow now they have one under their belts.”