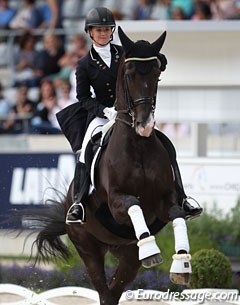 Judy Reynolds is The Irish Field Dressage Rider of the Year for 2017.  Judy and her now 16-year-old Jazz gelding Vancouver K, owned by her parents Joe and Kathleen Reynolds, were the first Irish combination to qualify for the World Cup Dressage finals.

Performing to her eighties divas themed freestyle to music programme, Judy and Vancouver K danced their way to a score of 79.571% and fourth place in the 2017 World Cup Final Grand Prix Kür [Freestyle to Music] in Omaha, United States of America in April 2017.

Unfortunately an injury to Vancouver K ruled them our for the 2017 European Championships and the 2017/2018 World Cup Dressage season.  They have their sights firmly set on returning to international competition in April with the ultimate aim of competing at the 2018 World Equestrian Games, in Tryon, North Carolina, United States of America next September.