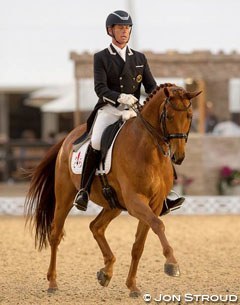 Barolo is a 12-year old Hanoverian gelding bred by Diana Eustace in the Great Britain. He is by Breitling W out of Highlight (by Hitchcock). The chestnut was owned by A Seifert-Cohn in partnership with Carl Hester.

One year later Carl Hester was on board the gelding and rode him to victory at the invitational CDI in Windsor and at the CDI Bolesworth. The horse's last international was Bolewworth in June 2017 where he scored 74.240% and 77.475%.

The 33-year old Sado has been competing Bellissimo and Ziroco at international GP level in 2015 and 2016. He also has the small tour ride on Urban Legend, Di Luca B, and Soraya van het Trichelhof. Sado was on the lookout for a horse that could put him on the Japanese Dressage team with the 2018 WEG and 2010 Olympics in Tokyo in sight. Last year his sponsor was close to purchasing the renowned Lusitano mare Batuta but the deal fell through at the end.

Trained by Imke Schellekens-Bartels in The Netherlands, Sado moved from Batuta to Barolo. The deal was closed by the end of 2017 although the official ownership of the horse was changed with the FEI  on 5 February 2018.