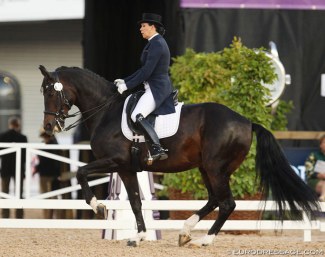 In the Central European League, riders qualify for the Final using a points system based on finishing places at the qualifying legs, and the two spots up for grabs went to Russia’s Inessa Merkulova (53) and Hanna Karasiova (33) from Belarus.

Later that month, Swedish star Patrik Kittel (Well Done de La Roche) claimed maximum points for his win in Brno (CZE) where Hungary’s Nikolett Szalai (Willy the Hit) finished second. Karasiova dominated at Taillinn (EST) in August where she steered Zodiak into pole position and Arlekino into third but it was Merkulova who stole the limelight in Moscow (RUS) in September when first with the fabulous Mister X and third with Avans, and following another win at the New Century venue in Moscow later that same month she cemented her position on the leaderboard.

Merkulova has competed at three FEI European Championships, four FEI World Equestrian Games and the Rio 2016 Olympic Games. She has also lined out at six FEI World Cup™ Dressage Finals, and with Mister X has posted top-10 finishes in the last four editions.

Estonia’s Dina Ellermann (Landy’s Akvarel) pipped Karasiova for the top spot in Taillinn in October and Denmark’s Malene Kohlschmidt Ebbesen (Mira) won the tenth leg in Zakrzow (POL) before Karasiova concluded her impressive campaign with a first and third placing at the final Freestyle in Moscow in December which earned her the second berth for this region at the Paris Final.