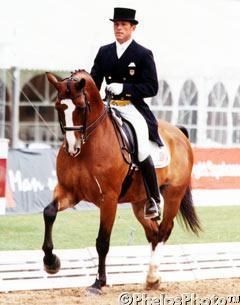 Guenter Seidel's 2000 Olympic ride Foltaire has passed away. The 30-year old Foltaire was euthanized on 27 January 2018 as he struggled with old age.

Born in 1987, Foltaire was a Dutch warmblood gelding by Voltaire out of Vetronella (by Afrikaner x). He was bred by H. Imkamp.

The pair made its national show debut in 1997 at Intermediaire II level and competed consistently at international Grand Prix level from 1997 till 2002.

As Graf George dis his last intercontinental championship at the 1998 World Equestrian Games in Rome, Foltaire took over the baton for the 2000 Olympics. In Sydney the horse suffered a colic attack but recovered quickly enough and did not an operation. He was 15th in the Grand Prix but withdrew from the Special. In 2002 he was also in the running for a team spot for the 2002 World Equestrian Games in Jerez, but stable mate Nikolaus ended up getting qualified.

Seidel rode his last show on Foltaire in June 2002. One month later Donna Salazar(née McKenna) took over the ride and competed him at small tour level from July 2002 till April 2005 after which his show career ended.

Foltaire enjoyed a long, full retirement at the Browns' farm in California. He was about to turn 31 in the spring.