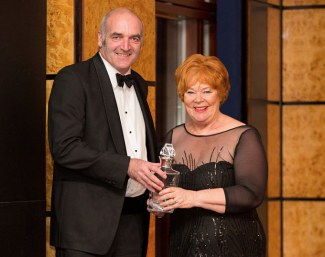 On Saturday 13 January 2018 breeders of the top British-bred horses from around the country converged in London at the Grange City Hotel, for the 21st Anniversary British Breeders Dinner and Awards Ceremony, organised by the British Horse Foundation. There has been much to celebrate for British Breeding in 2017 and this glittering occasion affords the breeders of these potential world-class horses the special recognition they deserve.

Guests arrived at the drinks reception before moving on to a sumptuous four-course dinner, followed by invited guest speaker Roger Hart, who gave a very entertaining speech recounting his participation in the racing industry who then went on the conduct the evening’s auction that raised £8,500 For the British Horse Foundation.

In the prestigious Futurity age awards, Julia Wilkinson, the owner of Gigi, collected the yearling award on behalf of her breeder, Sarah Lucas, a dressage prospect. The two-year old award went to another dressage prospect Woodlander Wild Love bred by Lynne Crowden who also bred the horse that was presented with three-year old award, Woodlander Gloria, owned by Hannah Markham, who will start her ridden career.

The SPSS Award went to a British bred, SPSS passported and Elite graded pony Littledale Bright Star in recognition of his outstanding contribution to British sports pony & horse breeding as he, a British - bred pony of just 12.2 hands, has sired horses or ponies which have competed at FEI International competitions in three disciplines.

The Anglo European Studbook Award went to The Billy Stud in recognition of its contribution to the sport horse breeding industry.

The British Grooms Awards for the often ‘unsung’ heroes of the equestrian industry were distributed in 6 categories, none went to dressage grooms. Amy Baynton who works for World Horse Welfare was the recipient of the British Grooms Award that was open to all grooms in the equestrian industry; with Josh Steer being awarded the runners-up prize who works at Stallion AI Services.

The Yard Manager Award was presented to Caron Roberts, with the Equine Apprentice Award going to Katie Jane Scott who is based with Tori Desborough.

The culmination of the evening was the Meritoire Lifetime Achievement Award; this annual award is presented as recognition for a lifetime’s contribution to the breeding industry… The Award was presented to Lynne Crowden, who received a resounding round of applause from everyone in the room, when it was announced who was the recipient for 2018.