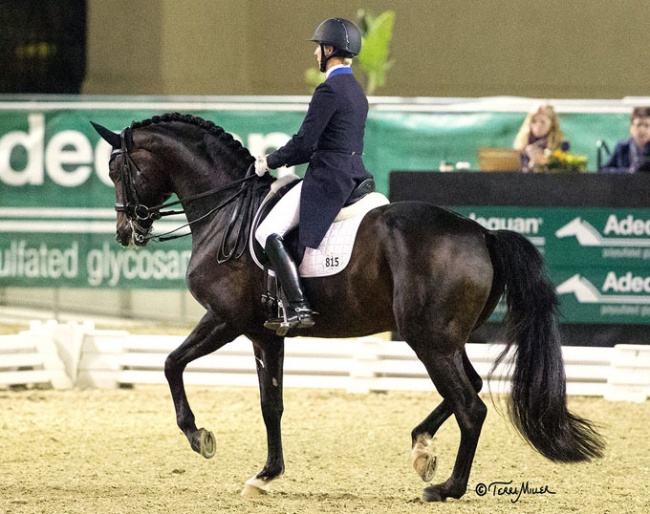 After a 2.5-year break from international competition, Sabine Schut-Kery and Sanceo returned to the CDI show ring with a bang. At the 2018 CDI-W Del Mar, the duo made its international Grand Prix debut after putting on mileage in Europe last autumn. They won the Grand Prix and World Cup qualifier freestyle with scores over 74%.

Schut and Mike & Alice Womble-Heitmann's 12-year old Hanoverian stallion Sanceo (by San Remo x Ramiro's Son II) were unbeatable with a 74.000% Grand Prix score, despite the huge score discrepancies amongst the judges (70.761% Wessels - 78.913% Torrente). Also in the Kur to Music, the duo felt no heat in their neck and landed first place with 74.100%. The judges marks ranged from 70.500% (Geikie) to 77.125% (Wessels). Sabine rode to music arranged by her husband Kristian Kery, which was based on different movie pieces, such as The Last Samurai and Last of the Mohicans.

"He felt very rideable and reliable in both tests in a challenging evening indoor atmosphere," Schut-Kery told Eurodressage. "I am extremely happy with how Sanceo went in both tests and pleased with such a great start in the CDI's."

U.S. team trainer Robert Dover was present in Del Mar to inspect the level of the West coast riders and he was full of praise for the winning combination: "This wonderful pair show great talent for everything as well as a loving relationship that is rare and so beautiful to see."

Schut-Kery spent the autumn in Europe training with Jan Nivelle in Mönchengladbach, Germany. This European training stint was made possible by the 2017 Carol Lavell Advanced Prize she received as well as through the continuing support of Sanceo's owners.  Schut put Grand Prix mileage on Sanceo by competing him in some classes at the national shows held by Hof Kasselmann at the Ankum Dressage Club in October and November.

"We had two very productive months under Jan's knowledgeable eye, finishing the trip by winning our first (short) Grand Prix in Ankum in November," said Sabine.

Schut-Kery is based at El Campeon Farms in Thousand Oaks, California, and has been working with Christine Traurig for the past 9 years. Always keeping the welfare and mental health of her horse in mind, Sabine stressed that she is not rushing her horse to meet U.S. WEG qualification standards at any cost.

"The goal and priority for 2018 is to continuing to develop this horse into a quality and happy athlete one step at a time and we are excited about the future," she concluded.