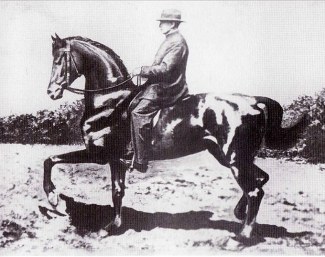 This article is a continuation of Flexions and Flexibility - Part I

The German and French Version

Nineteenth century dressage master Gustav Steinbrecht practiced small flexions he called shoulder-fore, in which he made sure that each shoulder moved forward inside the slight lateral flexion of the neck and the dorsal spine. He did the same in the counter canter: the horse bent with the canter, nose to the wall, making sure that the leading shoulder of the canter went as forward as possible. This work is a very effective way to establish the uprightness of the torso (vertical axis of withers-sternum).

In François Baucher’s book Second Manner, he states the technique of the “ramener outre” (or deep flexion)  only finds its full value when the rider practices it in tran- sitions from reinback into all three gaits, in half passes, trot extensions and piaffe. In other words, he made sure that even a deep flexion did not prevent any form of the forward movement of the shoulders or diminish the thrust of the hind legs.

Even though both masters practiced a different form of flexions, their techniques sought the same goal: arch- ing of the neck, lightness of the mouth by relaxation and forwardness of the gait with full range of motion of the shoulders. Steinbrecht increased his demand for flexibility in two small symmetrical, lateral flexions, going from shoulder- fore to shoulder-in. Baucher, who was regrettably not concerned with the lateral flexion of the back (he famously refused to use the shoulder-in), simply “fixed the base of the neck” by a deep vertical flexion alternating with moments of elevation of the neck. That technique gave him the re- traction of C6/C7 which guaranties the horse’s balance in all circumstances. The great Beudant confirmed that this approach gave his horses a very stable position of the neck in complete lightness as shown in the photo at right.

Portuguese master Nuno Oliveira said one must never use “hands without legs, legs without hands. But the flex- ions [in place of the forehand] of Baucher do not lead to real lightness [on their own, yet] they are a precious means to school the horse without pulling on the reins. True lightness is achieved through all the exercises and movements executed with a maximum of impulsion and the flexibility of the spinal column [as advised by Steinbrecht].”

Oliveira’s advice demonstrates his fundamental view: combine the French and German schools to achieve light- ness, yet never lose the energy that sends the horse to- ward the bit. Work on flexions so the horse can be handled without resistance to the aids, yet work with enough energy in all directions to maintain the muscular tonus that helps the horse support himself in the complete range of each gait. Training the horse is like making vin- aigrette: add a bit of this and a bit of that, then taste it and add something again, until the perfect mixture is achieved. There is no absolute recipe, but you will know it is right when you taste it.

In a letter to Michel Henriquet, included in 30 Years with Master Nuno Oliveira, Oliveira said, “The methods are valid through the results they achieve with a large number of different horses. I told you that I have neither invented nor discovered anything, but the techniques I utilize work, for they give me good results with countless horses.”This statement from a master who trained many horses to the highest level is the best explanation of the importance of studying all the resources available in the dressage literature and combining them in the most effective way possible. Each master had his own “hobby horse” that he developed to its maximum, often leading him to disregard other important aspects of training. The whole of dressage is greater than the sum of its parts, as long as each technique is used appropriately.

A horse that has not learned flexion will never be completely trained and will not be light in all phases of his work because, at one point or another, the demands of the rider through the aids will hit a “rough spot” that has not been relaxed adequately. A horse that is being flexed in excess (too much, too often) in certain parts of his body (the lateral flexion of the base of the neck for instance) may lose the muscular tonus necessary to maintain his energy and direction. In the work of flexions, as in any other aspect of dressage, the key is “the good measure.”

Flexions are the yoga of the horse, associating supple- ness with the dynamism of the gaits. Beyond the obvious flexions of the jaw, poll and neck, other exercises are ap- plied to the rest of the body. Examples include: the rein- back flexes the loins, stifles and hocks vertically; the turns around the forehand flex the back and hips laterally; collection in place (engaged halts) and piaffe flex everything (flexion of the whole).

As the “yoga professor,” the trainer must learn how to apply flexions and decide which exercises will be most useful to the training process and at what stage. Their effect must be long lasting and improve not only the immediate response to the aids but also the long term soundness of the horse. This means, at the mini- mum, that he must become upright through symmetri- cal bending and move with an

equal range of motion in turns in both directions. When this preparatory work is not done thoroughly, movement be- comes asymmetrical, weight loading of the legs is uneven, muscles of one limb become shorter (evident by the height difference of the horse’s heels in the majority of horses), tension on tendons and ligaments increases and pressure on one side of the joints increase in the most loaded limb. Lameness

is eventually the result of this mechanical asymmetry. It is in the slower diagonal gaits which do not benefit from the momentum of speed, such as trot half-passes, piaffe and passage, where we see the greater evidence of unevenness

This is the name given today to a flexion brought to its limit. It is stamped with the moral disapproval of many in the horse world, but in my opinion their commentaries often lack a solid understand- ing of horse anatomy or a study of equestrian literature. As far as equine biomechanics are concerned, many horses (particularly stallions) flex themselves deeply quite frequently for a variety of reasons. The gray horse shown at right is stretching himself, as all animals do on occasion, just after getting up from a nap in the field. He is lengthening his topline to the maximum, from the point of his shoulder to the tip of his nose. The black Percheron foal pictured is over- bending for a lengthy session of chest scratching, adding the movement of his jaws to the flexion of his neck. These positions of the head and neck are totally natural to all horses and completely comfort- able, as no horse in his right mind would take a position that hurts his neck or restricts his breathing or vision.

How does this relate to dressage? From the earliest Celtiberian riders of pre-Roman Spain (see photo be- low) to Pignatelli (a sixteenth century Italian master and pioneer of dressage) to Baucher in the nineteenth century, they all used flexion and relative overbending in their training of horses. That said, those deep flexions only have value if they respect the parameters of light- ness and relaxation I mentioned above. The horse must achieve this position in complete relaxation and find it as comfortable as if he was taking this position on his own.

The difficulty of all training is not to achieve this or that movement or position, but to get the horse to adopt it in response to the aids in a relaxed manner. I was recently working one of my horses in hand, flexing him laterally at the poll to release some tension I felt was present in his TMJ joint. This was not proving easy. Then another stallion screamed from the nearby barn and my horse instantly elevated his poll to its maximum and turned his head 90 degrees to the right, holding that position without any effort for a few seconds. This demonstrates it is not the position or the movement that is difficult; rather it is to motivate a relaxed response to the aids that is the challenge.

Critics of dressage need to take a larger view in order to form valid opinions on the work of one rider or another. What matters is the shape of the back under the saddle, the quality of the contact, the relaxation of the entire forehand, the expression of the horse, his general posture and straightness and the freedom of his movement. The actual position of the head and neck is a momentary tool chosen judiciously by the trainer at that instant of training. Abstract rules of correctness can only serve as general guidelines that are meant to be broken on occasion, according to the problem presented by the individual horse. As Nuno Oliveira said so many times, “What matters in dressage is not purist riding theories but that the trained horse presents no resistances to the aids and looks happily at his rider at the end of his lesson.”