Ward Beats Graves for 2017 U.S. Equestrian of the Year Title 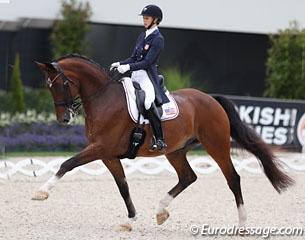 At the USEF Pegasus Awards Dinner, dressage was not amongst the decorated disciplines this year, although KWPN horse breeder Willy Arts received the Ellen Scripps Davis Memorial Breeders Award.

Because Laura Graves finished second at the 2017 World Cup Finals and won the Grand Prix Special at the 2017 CDIO Aachen, she was being considered for the top distinction of the year (Equestrian of the Year Title). She still received the William C. Steinkraus Trophy for her major accomplishments in 2017.

"Without the horse none of this would be possible. We owe them our lives," said Ward. "They give us so much and they ask for only basic kindness in return. I believe horses and humans have a connection that draws us to each other. I believe in their own way they know we need them and they are pleased to be our partner whether it be in work or sport. We need to remember to never take this privilege of working and living with horses for granted. To never lose our appreciation for what they have given us throughout the history of time and to be sure that their relevance in our society does not fade away. This is our greatest responsibility as equestrians."