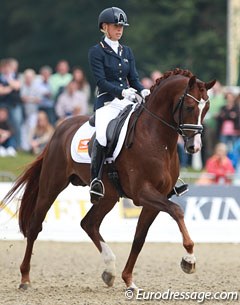 Eye Catcher is a 9-year old licensed stallion by Vivaldi x Partout and Five Star is an 8-year old KWPN stallion by Amazing Star x Jazz. Both are owned by the Indonesian Titan Wilaras who has Platinum Stables in The Netherlands.

Kirsten Brouwer, her mom Annemarie and their family ran Platinum Stables for Wilaras, but the two parties fell out and ended their collaboration in November 2017. A mud sling fest followed in the Dutch equestrian media.

As the Brouwers moved out of the facilities, the Spanish brothers Antonio and Miguel Laiz Zandio moved in mid December.

The Laiz brothers had spent their summer in Germany with Antonio training with Spanish Grand Prix rider Borja Carrascosa while Miguel is involved with show jumpers. Antonio had tried out a horse at Platinum stables round that time, but it wasn't until the CDI Roosendaal Indoor the first weekend of December that Wilaras approached the Spaniard to come and work for him.

The 22-year old Antonio, who has competed at the 2016 European Young Rider and 2017 European Under 25 Championships with Gejholms Menotti, will now be riding Wilaras' horses, including the top horses of the barn, Eye Catcher and Five Star.

With Eye Catcher Laiz has scheduled his show debut at Prix St Georges level at the regional show in Maren-Kessel on 28 January 2018.