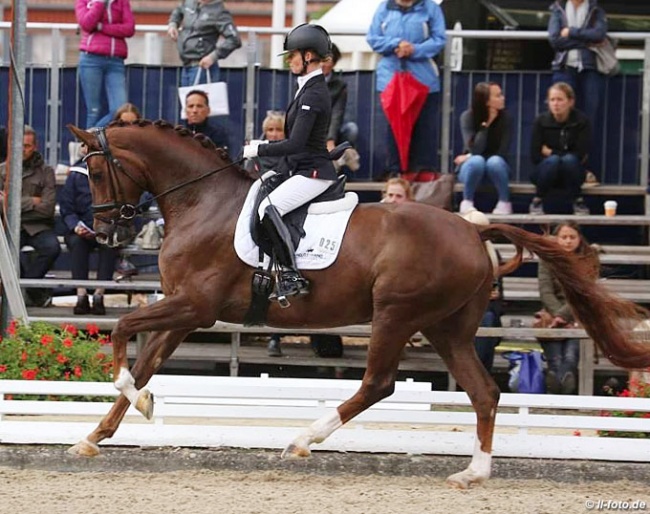 The California based American small tour rider Sarah Lockman has received the ride on the 6-year old Westfalian mare Balia. Her sponsor Gerry Ibanez acquired the mare for Sarah at Helgstrand Dressage U.S.A. in Wellington.

Balia is a 2012 born mare, bred by Hermann Roloff and previously owned by Andreas Helgstrand. She is by Belissimo M out of Felina (by Florestan x Weltmeyer).

The liver chestnut was first competed by Ilke Albers in 2016 but in the spring of 2017 Eva Möller took over the ride. She presented the mare at the Bundeschampionate qualifiers in Hagen, Bielefeld, and Munster and finished 6th at the 2017 Bundeschampionate Final in Warendorf.

Balia was part of the group of horses that was shipped to Wellington, Florida, to fill the barn of Helgstrand's new sales hub in the U.S.A., which is managed by Eva's husband, Ulf Möller.  She is one of the first horses sold out of that barn.

"My long time client Gerry Ibanez has made this possible and is committed to the future," said Lockman. "Scott Hassler, who is my mentor and coach, saw this young superstar and after sitting on her, he told me "this is the one"."

Lockman is based in Orange, California, with her sales and training facility. With a background in eventing and having switched to dressage, she has competed Vinterpol, Zorren Ten X and Calimero at international small tour level in California the past five years.