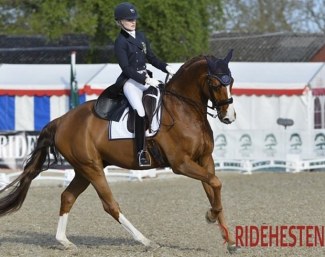 Swedish Under 25 Grand Prix rider Isabelle Tovek had to say goodbye to her Grand Prix horse Weltliebe. On Sunday 7 January 2018, the 15-year old Danish warmblood fractured his leg in the field and had to be euthanized.

The chestnut was originally owned by the Danish Skodborg Merrald family who acquired him as a youngster. Nanna Skodborg Merrald began competing him as a 5-year old but sister Sandra soon took over. As of 2013, Nanna was back on board and she took him from small tour level to Grand Prix.

Weltliebe sold to Sweden little over two years ago and Isabella began competing him at young riders' level. They won gold at the 2016 Swedish Young Riders Championships. In 2017 they moved to the Under 25 division and scored a bronze medal at the Nordic Baltic Championships

The now 22-year old Tovek ride her first CDI on Weltliebe in Nieuw en St. Joosland in April 2016 and rode one more CDI in Odense that year. A year later she returned for the 2017 Nordic Baltic Championships, where they won individual bronze, and they competed in the international Under 25 classes held during the 2017 European Championships in Gothenburg.

Weltliebe was turned out in the field yesterday. When the family arrived back home he was on three legs. The vets diagnosed multiple fractures to the leg and the horse could not be saved.

"This was not the way I wanted to end our career," said a bereaved Tovek, who announced the sad passing of her horse on Instagram. "We still had many years together. I will never forget him."