Abigail Hutton On Social Media: "Try and Think Before You Type" 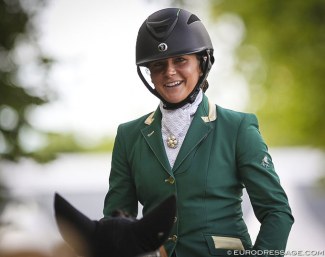 Guest columnist of this week is Irish FEI rider Abigail Hutton who wrote a heartfelt opinion piece on the bullying and shaming that is rampant on Facebook within the equestrian community. Unfounded  and below the belt attacks based on photos of a British para dressage rider and an amateur on a horse learning half steps were the the last straw. Hutton put herself behind the keyboard and wrote the following message:

On Social Media: "Try and Think Before You Type"

The equestrian world is a really tough place to be. It’s early mornings, cold weather, long days, late nights, rare days off and non existent holidays. We look after our horses like children, but get trodden on, dragged about, covered in crap, mud everywhere, deal with their injuries, replace their ripped clothes and spend most of our time broke. That’s before we even get on, then we get bucked off, spooked with, numb toes and hands, endure terrifying hacks, abuse from motorists, screamed at by our trainers and I’m not even going to go into the chafing thing. But we love it, we love those darned animals more than ourselves. I can’t remember the last time I went to the doctor but my vet is a regular visitor for the tiniest things.

So you’d think that by the time we’ve fought all of this in the day, we would resist making cruel comments about each other on social media. No one goes through all this to then get on a horse and thinks ‘I’m going to flap and kick and give this horse (that I spend all my spare pennies on giving a good life) a hard time’. People don’t set out to ride badly, but sitting on an animal with its own mind and a lot of movement whilst trying to keep absolute control of your limbs is bloody hard!

I try every day to be better, I work out, I get training, I and watch my weight and I can genuinely say I’m getting better, I’m miles from where I want to be but I know I’m getting better. But I also know that there are so many days when it’s not great and I get tense and my legs flap and other days I hold on too tight. Should I give up? Does that also mean I should ring up all my clients and tell them I can’t help them anymore? On those days is all the work I’ve put in and knowledge I’ve acquired over the years useless?! If I’m asked to do a demo and feel my nerves set in, my back gets tight and I’m stiff in my sitting trot, should I stop and tell all the folks watching I need to go because I’m doing a bad job and I know everyone on social media will pull me apart?!

In the last few months, I’ve seen two friends tragically lose their horses to colic and another friend have an accident which could have been fatal (he was very lucky). You’d think as a community perspective would be flowing! The comments I’ve seen recently are disturbing, and if the folks commenting want to say they’re looking out for the welfare of the horse, follow the rider around for the day and see how pretty much all they do is in the best interests of their horse. Yes there are a few bad eggs out there, but I have been around a lot of yards and I’ve never seen it happen in this country. And rollkur is a horrid issue that needs to be dealt with, but what I’ve seen lately has nothing to do with rollkur and people that oppose it as much as anyone are getting stick. Again, there are baddies out there, but try and think before you type. Horses get short in the neck, lose engagement behind; aren’t these the scenarios where we learn most rather than seeing it perfect all the time?

So next time you see a video and think their horse is over bent, or they are using too much spur, sit back, make a cup of tea and think how you would feel if someone made comments like that about you; think if it’s likely the rider means to do it, because one thing I know for sure, there is not a single rider on the planet who has not kicked, flapped or pulled when they haven’t meant to.

We are all guilty of being crap but it doesn’t mean we deserve to be publicly slated. And it doesn’t mean we should quit, or that we shouldn’t celebrate imperfections in the sport. That’s why our horses are so great, they forgive us every day. And until my horses stop opening their moths and grabbing the bit when I tack them up, or stop pricking an ear, or stop giving me the most incredible feeling when we do get it right, then I’m going to keep going.

Make a change this year: let’s encourage each other!